Observations of molecular clouds reveal a complex structure, with gas and dust often arranged in filamentary, rather than spherical geometries. The association of pre- and proto-stellar cores with the filaments suggests a direct link with the process of star formation. Any study of the properties of such filaments requires representative samples from different environments for an unbiased detection method. We developed such an approach using the Hessian matrix of a surface-brightness distribution to identify filaments and determine their physical and morphological properties. After testing the method on simulated, but realistic, filaments, we apply the algorithms to column-density maps computed from Herschel observations of the Galactic plane obtained by the Hi-GAL project. We identified ~500 filaments, in the longitude range of l = 216.°5 to l = 225.°5, with lengths from ~1 pc up to ~30 pc and widths between 0.1 pc and 2.5 pc. Average column densities are between 1020 cm-2 and 1022 cm-2. Filaments include the majority of dense material with N_H_{2} > 6 × 1021 cm-2. We find that the pre- and proto-stellar compact sources already identified in the same region are mostly associated with filaments. However, surface densities in excess of the expected critical values for high-mass star formation are only found on the filaments, indicating that these structures are necessary to channel material into the clumps. Furthermore, we analyze the gravitational stability of filaments and discuss their relationship with star formation. 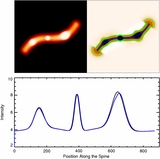