Observations with the Interface Region Imaging Spectrograph (IRIS) have revealed numerous sub-arcsecond bright dots in the transition region above sunspots. These bright dots are seen in the 1400 Å and 1330 Å slit-jaw images. They are clearly present in all sunspots we investigated, mostly in the penumbrae, but also occasionally in some umbrae and light bridges. The bright dots in the penumbrae typically appear slightly elongated, with the two dimensions being 300-600 km and 250-450 km, respectively. The long sides of these dots are often nearly parallel to the bright filamentary structures in the penumbrae but sometimes clearly deviate from the radial direction. Their lifetimes are mostly less than one minute, although some dots last for a few minutes or even longer. Their intensities are often a few times stronger than the intensities of the surrounding environment in the slit-jaw images. About half of the bright dots show apparent movement with speeds of ~10-40 km s-1 in the radial direction. Spectra of a few bright dots were obtained and the Si IV 1402.77 Å line profiles in these dots are significantly broadened. The line intensity can be enhanced by one to two orders of magnitude. Some relatively bright and long-lasting dots are also observed in several passbands of the Atmospheric Imaging Assembly onboard the Solar Dynamics Observatory, and they appear to be located at the bases of loop-like structures. Many of these bright dots are likely associated with small-scale energy release events at the transition region footpoints of magnetic loops. 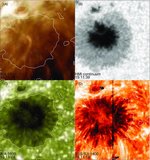