We present deep continuum observations using the GISMO camera at a wavelength of 2 mm centered on the Hubble Deep Field in the GOODS-N field. These are the first deep field observations ever obtained at this wavelength. The 1σ sensitivity in the innermost ~4' of the 7' diameter map is ~135 μJy beam-1, a factor of three higher in flux/beam sensitivity than the deepest available SCUBA 850 μm observations, and almost a factor of four higher in flux/beam sensitivity than the combined MAMBO/AzTEC 1.2 mm observations of this region. Our source extraction algorithm identifies 12 sources directly, and another 3 through correlation with known sources at 1.2 mm and 850 μm. Five of the directly detected GISMO sources have counterparts in the MAMBO/AzTEC catalog, and four of those also have SCUBA counterparts. HDF850.1, one of the first blank-field detected submillimeter galaxies, is now detected at 2 mm. The median redshift of all sources with counterparts of known redshifts is \tilde{z} = 2.91+/- 0.94. Statistically, the detections are most likely real for five of the seven 2 mm sources without shorter wavelength counterparts, while the probability for none of them being real is negligible. 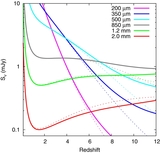