Isolated flux tubes are considered to be fundamental magnetic building blocks of the solar photosphere. Their formation is usually attributed to the concentration of magnetic field to kG strengths by the convective collapse mechanism. However, the small size of the magnetic elements in quiet-Sun areas has prevented this scenario from being studied in fully resolved structures. Here, we report on the formation and subsequent evolution of one such photospheric magnetic flux tube, observed in the quiet Sun with unprecedented spatial resolution (0.''15-0.''18) and high temporal cadence (33 s). The observations were acquired by the Imaging Magnetograph eXperiment on board the SUNRISE balloon-borne solar observatory. The equipartition field strength magnetic element is the result of the merging of several same polarity magnetic flux patches, including a footpoint of a previously emerged loop. The magnetic structure is then further intensified to kG field strengths by convective collapse. The fine structure found within the flux concentration reveals that the scenario is more complex than can be described by a thin flux tube model with bright points and downflow plumes being established near the edges of the kG magnetic feature. We also observe a daisy-like alignment of surrounding granules and a long-lived inflow toward the magnetic feature. After a subsequent weakening process, the field is again intensified to kG strengths. The area of the magnetic feature is seen to change in anti-phase with the field strength, while the brightness of the bright points and the speed of the downflows varies in phase. We also find a relation between the brightness of the bright point and the presence of upflows within it. 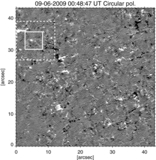