We performed high-dispersion near-infrared spectroscopic observations of comet C/2010 G2 (Hill) at 2.5 AU from the Sun using NIRSPEC (R ≈ 25,000) at the Keck II Telescope on UT 2012 January 9 and 10, about a week after an outburst had occurred. Over the two nights of our observations, prominent emission lines of CH4 and C2H6, along with weaker emission lines of H2O, HCN, CH3OH, and CO were detected. The gas production rate of CO was comparable to that of H2O during the outburst. The mixing ratios of CO, HCN, CH4, C2H6, and CH3OH with respect to H2O were higher than those for normal comets by a factor of five or more. The enrichment of CO and CH4 in comet Hill suggests that the sublimation of these hypervolatiles sustained the outburst of the comet. Some fraction of water in the inner coma might exist as icy grains that were likely ejected from nucleus by the sublimation of hypervolatiles. Mixing ratios of volatiles in comet Hill are indicative of the interstellar heritage without significant alteration in the solar nebula. 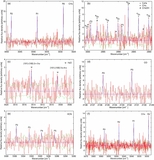