The ongoing discoveries of extra-solar planets are unveiling a wide range of terrestrial mass (size) planets around their host stars. In this Letter, we present estimates of habitable zones (HZs) around stars with stellar effective temperatures in the range 2600 K-7200 K, for planetary masses between 0.1 M ⊕ and 5 M ⊕. Assuming H2O-(inner HZ) and CO2-(outer HZ) dominated atmospheres, and scaling the background N2 atmospheric pressure with the radius of the planet, our results indicate that larger planets have wider HZs than do smaller ones. Specifically, with the assumption that smaller planets will have less dense atmospheres, the inner edge of the HZ (runaway greenhouse limit) moves outward (~10% lower than Earth flux) for low mass planets due to larger greenhouse effect arising from the increased H2O column depth. For larger planets, the H2O column depth is smaller, and higher temperatures are needed before water vapor completely dominates the outgoing longwave radiation. Hence the inner edge moves inward (~7% higher than Earth's flux). The outer HZ changes little due to the competing effects of the greenhouse effect and an increase in albedo. New, three-dimensional climate model results from other groups are also summarized, and we argue that further, independent studies are needed to verify their predictions. Combined with our previous work, the results presented here provide refined estimates of HZs around main-sequence stars and provide a step toward a more comprehensive analysis of HZs. 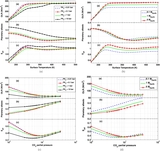