Magnetohydrodynamics and Deep Mixing in Evolved Stars. I. Two- and Three-dimensional Analytical Models for the Asymptotic Giant Branch

The advection of thermonuclear ashes by magnetized domains emerging near the H shell was suggested to explain asymptotic giant branch (AGB) star abundances. Here we verify this idea quantitatively through exact MHD models. Starting with a simple two-dimensional (2D) geometry and in an inertia frame, we study plasma equilibria avoiding the complications of numerical simulations. We show that below the convective envelope of an AGB star, variable magnetic fields induce a natural expansion, permitted by the almost ideal MHD conditions, in which the radial velocity grows as the second power of the radius. We then study the convective envelope, where the complexity of macroturbulence allows only for a schematic analytical treatment. Here the radial velocity depends on the square root of the radius. We then verify the robustness of our results with 3D calculations for the velocity, showing that for both studied regions the solution previously found can be seen as a planar section of a more complex behavior, in which the average radial velocity retains the same dependency on the radius found in 2D. As a final check, we compare our results to approximate descriptions of buoyant magnetic structures. For realistic boundary conditions, the envelope crossing times are sufficient to disperse in the huge convective zone any material transported, suggesting magnetic advection as a promising mechanism for deep mixing. The mixing velocities are smaller than for convection but larger than for diffusion and adequate for extra mixing in red giants. 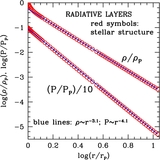