Temporal Evolution of Solar Wind Ion Composition and their Source Coronal Holes during the Declining Phase of Cycle 23. I. Low-latitude Extension of Polar Coronal Holes

We analyzed 27 solar wind (SW) intervals during the declining phase of cycle 23, whose source coronal holes (CHs) can be unambiguously identified and are associated with one of the polar CHs. We found that the SW ions have a temporal trend of decreasing ionization state, and such a trend is different between the slow and fast SW. The photospheric magnetic field, both inside and at the outside boundary of the CH, also exhibits a trend of decrease with time. However, EUV line emissions from different layers of the atmosphere exhibit different temporal trends. The coronal emission inside the CH generally increases toward the CH boundary as the underlying field increases in strength and becomes less unipolar. In contrast, this relationship is not seen in the coronal emission averaged over the entire CH. For C and O SW ions that freeze-in at lower altitude, stronger correlation between their ionization states and field strength (both signed and unsigned) appears in the slow SW, while for Fe ions that freeze-in at higher altitude, stronger correlation appears in the fast SW. Such correlations are seen both inside the CH and at its boundary region. On the other hand, the coronal electron temperature correlates well with the SW ion composition only in the boundary region. Our analyses, although not able to determine the likely footpoint locations of the SW of different speeds, raise many outstanding questions for how the SW is heated and accelerated in response to the long-term evolution of the solar magnetic field. 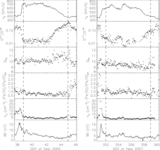