The short-period comet P/2010 V1 (Ikeya-Murakami, hereafter "V1") was discovered visually by two amateur astronomers. The appearance of the comet was peculiar, consisting of an envelope, a spherical coma near the nucleus and a tail extending in the anti-solar direction. We investigated the brightness and the morphological development of the comet by taking optical images with ground-based telescopes. Our observations show that V1 experienced a large-scale explosion between UT 2010 October 31 and November 3. The color of the comet was consistent with the Sun (g' - R C = 0.61 ± 0.20, R C - I C = 0.20 ± 0.20, and B - R C = 0.93 ± 0.25), suggesting that dust particles were responsible for the brightening. We used a dynamical model to understand the peculiar morphology, and found that the envelope consisted of small grains (0.3-1 μm) expanding at a maximum speed of 500 ± 40 m s-1, while the tail and coma were composed of a wider range of dust particle sizes (0.4-570 μm) and expansion speeds 7-390 m s-1. The total mass of ejecta is ~5 × 108 kg and kinetic energy ~5 × 1012 J. These values are much smaller than in the historic outburst of 17P/Holmes in 2007, but the energy per unit mass (1 × 104 J kg-1) is comparable. The energy per unit mass is about 10% of the energy released during the crystallization of amorphous water ice suggesting that crystallization of buried amorphous ice can supply the mass and energy of the outburst ejecta. 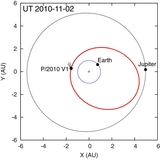