We present the first results of sunspot oscillations from observations by the Interface Region Imaging Spectrograph. The strongly nonlinear oscillation is identified in both the slit-jaw images and the spectra of several emission lines formed in the transition region and chromosphere. We first apply a single Gaussian fit to the profiles of the Mg II 2796.35 Å, C II 1335.71 Å, and Si IV 1393.76 Å lines in the sunspot. The intensity change is ~30%. The Doppler shift oscillation reveals a sawtooth pattern with an amplitude of ~10 km s-1 in Si IV. The Si IV oscillation lags those of C II and Mg II by ~3 and ~12 s, respectively. The line width suddenly increases as the Doppler shift changes from redshift to blueshift. However, we demonstrate that this increase is caused by the superposition of two emission components. We then perform detailed analysis of the line profiles at a few selected locations on the slit. The temporal evolution of the line core is dominated by the following behavior: a rapid excursion to the blue side, accompanied by an intensity increase, followed by a linear decrease of the velocity to the red side. The maximum intensity slightly lags the maximum blueshift in Si IV, whereas the intensity enhancement slightly precedes the maximum blueshift in Mg II. We find a positive correlation between the maximum velocity and deceleration, a result that is consistent with numerical simulations of upward propagating magnetoacoustic shock waves. 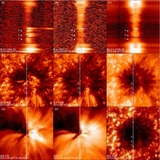