A Budget and Accounting of Metals at z ~ 0: Results from the COS-Halos Survey

We present a budget and accounting of metals in and around star-forming galaxies at z ~ 0. We combine empirically derived star formation histories with updated supernova and asymptotic giant branch yields and rates to estimate the total mass of metals produced by galaxies with present-day stellar mass of 109.3-1011.6 M⊙. On the accounting side of the ledger, we show that a surprisingly constant 20%-25% mass fraction of produced metals remain in galaxies' stars, interstellar gas and interstellar dust, with little dependence of this fraction on the galaxy stellar mass (omitting those metals immediately locked up in remnants). Thus, the bulk of metals are outside of galaxies, produced in the progenitors of today's L* galaxies. The COS-Halos survey is uniquely able to measure the mass of metals in the circumgalactic medium (CGM, to impact parameters of <150 kpc) of low-redshift ~L* galaxies. Using these data, we map the distribution of CGM metals as traced by both the highly ionized O VI ion and a suite of low-ionization species; combined with constraints on circumgalactic dust and hotter X-ray emitting gas out to similar impact parameters, we show that ~40% of metals produced by M sstarf ~ 1010 M⊙ galaxies can be easily accounted for out to 150 kpc. With the current data, we cannot rule out a constant mass of metals within this fixed physical radius. This census provides a crucial boundary condition for the eventual fate of metals in galaxy evolution models.

Based on observations made with the NASA/ESA Hubble Space Telescope, obtained at the Space Telescope Science Institute, which is operated by the Association of Universities for Research in Astronomy, Inc., under NASA contract NAS 5-26555. These observations are associated with program GO11598. 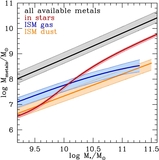