What is the Physical Origin of Strong Lyα Emission? I. Demographics of Lyα Emitter Structures

We present the results of structure analyses for a large sample of 426 Lyα emitters (LAEs) at z ~ 2.2 that are observed with the Hubble Space Telescope/Advanced Camera for Surveys and WFC3-IR during deep extra-galactic legacy surveys. We confirm that the merger fraction and the average ellipticity of LAE's stellar component are 10%-30% and 0.4-0.6, respectively, that are comparable with previous study results. We successfully identify that some LAEs have a spatial offset between Lyα and stellar-continuum emission peaks, δLyα, by ~2.5-4 kpc beyond our statistical errors. To uncover the physical origin of strong Lyα emission found in LAEs, we investigate the Lyα equivalent width (EW) dependences of three structural parameters: merger fraction, δLyα, and ellipticity of stellar distribution in the range of EW(Lyα) = 20-250 Å. Contrary to expectations, we find that the merger fraction does not significantly increase with Lyα EW. We reveal an anti-correlation between δLyα and EW(Lyα) using a Kolmogorov-Smirnov (K-S) test. There is a trend that the LAEs with a large Lyα EW have a small ellipticity. This is consistent with the recent theoretical claims that Lyα photons can more easily escape from face-on disks having a small ellipticity, due to less inter-stellar gas along the line of sight, although our K-S test indicates that this trend is not statistically significant. Our results of Lyα-EW dependence generally support the idea that an H I column density is a key quantity determining Lyα emissivity.

Based on data obtained with the Subaru Telescope operated by the National Astronomical Observatory of Japan. 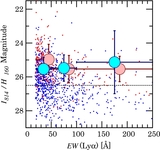