Meridional Flow in the Solar Convection Zone. I. Measurements from GONG Data

Large-scale plasma flows in the Sun's convection zone likely play a major role in solar dynamics on decadal timescales. In particular, quantifying meridional motions is a critical ingredient for understanding the solar cycle and the transport of magnetic flux. Because the signal of such features can be quite small in deep solar layers and be buried in systematics or noise, the true meridional velocity profile has remained elusive. We perform time-distance helioseismology measurements on several years worth of Global Oscillation Network Group Doppler data. A spherical harmonic decomposition technique is applied to a subset of acoustic modes to measure travel-time differences to try to obtain signatures of meridional flows throughout the solar convection zone. Center-to-limb systematics are taken into account in an intuitive yet ad hoc manner. Travel-time differences near the surface that are consistent with a poleward flow in each hemisphere and are similar to previous work are measured. Additionally, measurements in deep layers near the base of the convection zone suggest a possible equatorward flow, as well as partial evidence of a sign change in the travel-time differences at mid-convection zone depths. This analysis on an independent data set using different measurement techniques strengthens recent conclusions that the convection zone may have multiple "cells" of meridional flow. The results may challenge the common understanding of one large conveyor belt operating in the solar convection zone. Further work with helioseismic inversions and a careful study of systematic effects are needed before firm conclusions of these large-scale flow structures can be made. 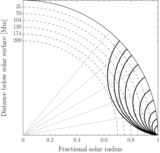