We present the results of our analysis of the RR Lyrae (RRL) variable stars detected in two transition-type dwarf galaxies (dTrans), ESO294-G010 and ESO410-G005 in the Sculptor group, which is known to be one of the closest neighboring galaxy groups to our Local Group. Using deep archival images from the Advanced Camera for Surveys on board the Hubble Space Telescope, we have identified a sample of RRL candidates in both dTrans galaxies (219 RRab (RR0) and 13 RRc (RR1) variables in ESO294-G010; 225 RRab and 44 RRc stars in ESO410-G005). The metallicities of the individual RRab stars are calculated via the period-amplitude-[Fe/H] relation derived by Alcock et al. This yields mean metallicities of lang[Fe/H]rangESO294 = -1.77 ± 0.03 and lang[Fe/H]rangESO410 = -1.64 ± 0.03. The RRL metallicity distribution functions (MDFs) are investigated further via simple chemical evolution models; these reveal the relics of the early chemical enrichment processes for these two dTrans galaxies. In the case of both galaxies, the shapes of the RRL MDFs are well described by pre-enrichment models. This suggests two possible channels for the early chemical evolution for these Sculptor group dTrans galaxies: (1) the ancient stellar populations of our target dwarf galaxies might have formed from the star forming gas which was already enriched through "prompt initial enrichment" or an "initial nucleosynthetic spike" from the very first massive stars, or (2) this pre-enrichment state might have been achieved by the end products from more evolved systems of their nearest neighbor, NGC 55. We also study the environmental effects of the formation and evolution of our target dTrans galaxies by comparing their properties with those of 79 volume limited (D ☉ < 2 Mpc) dwarf galaxy samples in terms of the luminosity-metallicity relation and the H I gas content. The presence of these RRL stars strongly supports the idea that although the Sculptor Group galaxies have a considerably different environment from the Local Group (e.g., no giant host galaxies, loosely bound and very low local density), they share a common epoch of early star formation with the dwarf satellite galaxies in the Local Group. 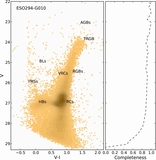