Trigonometric Parallaxes of High Mass Star Forming Regions: The Structure and Kinematics of the Milky Way

Over 100 trigonometric parallaxes and proper motions for masers associated with young, high-mass stars have been measured with the Bar and Spiral Structure Legacy Survey, a Very Long Baseline Array key science project, the European VLBI Network, and the Japanese VLBI Exploration of Radio Astrometry project. These measurements provide strong evidence for the existence of spiral arms in the Milky Way, accurately locating many arm segments and yielding spiral pitch angles ranging from about 7° to 20°. The widths of spiral arms increase with distance from the Galactic center. Fitting axially symmetric models of the Milky Way with the three-dimensional position and velocity information and conservative priors for the solar and average source peculiar motions, we estimate the distance to the Galactic center, R 0, to be 8.34 ± 0.16 kpc, a circular rotation speed at the Sun, Θ0, to be 240 ± 8 km s-1, and a rotation curve that is nearly flat (i.e., a slope of -0.2 ± 0.4 km s-1 kpc-1) between Galactocentric radii of ≈5 and 16 kpc. Assuming a "universal" spiral galaxy form for the rotation curve, we estimate the thin disk scale length to be 2.44 ± 0.16 kpc. With this large data set, the parameters R 0 and Θ0 are no longer highly correlated and are relatively insensitive to different forms of the rotation curve. If one adopts a theoretically motivated prior that high-mass star forming regions are in nearly circular Galactic orbits, we estimate a global solar motion component in the direction of Galactic rotation, V ⊙ = 14.6 ± 5.0 km s-1. While Θ0 and V ⊙ are significantly correlated, the sum of these parameters is well constrained, Θ0 + V ⊙ = 255.2 ± 5.1 km s-1, as is the angular speed of the Sun in its orbit about the Galactic center, (Θ0 + V ⊙)/R 0 = 30.57 ± 0.43 km s-1 kpc-1. These parameters improve the accuracy of estimates of the accelerations of the Sun and the Hulse-Taylor binary pulsar in their Galactic orbits, significantly reducing the uncertainty in tests of gravitational radiation predicted by general relativity. 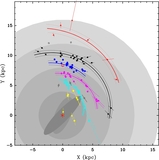