We present secondary eclipse observations of the highly irradiated transiting brown dwarf KELT-1b. These observations represent the first constraints on the atmospheric dynamics of a highly irradiated brown dwarf, the atmospheres of irradiated giant planets at high surface gravity, and the atmospheres of brown dwarfs that are dominated by external, rather than internal, energy. Using the Spitzer Space Telescope, we measure secondary eclipse depths of 0.195% ± 0.010% at 3.6 μm and 0.200% ± 0.012% at 4.5 μm. We also find tentative evidence for the secondary eclipse in the z' band with a depth of 0.049% ± 0.023%. These measured eclipse depths are most consistent with an atmosphere model in which there is a strong substellar hotspot, implying that heat redistribution in the atmosphere of KELT-1b is low. While models with a more mild hotspot or even with dayside heat redistribution are only marginally disfavored, models with complete heat redistribution are strongly ruled out. The eclipse depths also prefer an atmosphere with no TiO inversion layer, although a model with TiO inversion is permitted in the dayside heat redistribution case, and we consider the possibility of a day-night TiO cold trap in this object. For the first time, we compare the IRAC colors of brown dwarfs and hot Jupiters as a function of effective temperature. Importantly, our measurements reveal that KELT-1b has a [3.6] - [4.5] color of 0.07 ± 0.11, identical to that of isolated brown dwarfs of similarly high temperature. In contrast, hot Jupiters generally show redder [3.6] - [4.5] colors of ~0.4, with a very large range from ~0 to ~1. Evidently, despite being more similar to hot Jupiters than to isolated brown dwarfs in terms of external forcing of the atmosphere by stellar insolation, KELT-1b appears to have an atmosphere most like that of other brown dwarfs. This suggests that surface gravity is very important in controlling the atmospheric systems of substellar mass bodies. 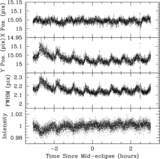