We present new large field observations of molecular clouds with NANTEN2 toward the super star cluster NGC 3603 in the transitions 12CO(J = 2-1, J = 1-0) and 13CO(J = 2-1, J = 1-0). We suggest that two molecular clouds at 13 km s-1 and 28 km s-1 are associated with NGC 3603 as evidenced by higher temperatures toward the H II region, as well as morphological correspondence. The mass of the clouds is too small to gravitationally bind them, given their relative motion of ~20 km s-1. We suggest that the two clouds collided with each other 1 Myr ago to trigger the formation of the super star cluster. This scenario is able to explain the origin of the highest mass stellar population in the cluster, which is as young as 1 Myr and is segregated within the central sub-pc of the cluster. This is the second super star cluster along with Westerlund 2 where formation may have been triggered by a cloud-cloud collision. 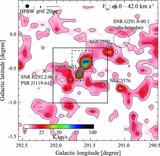