We present the results of a study to optimize the principal component analysis (PCA) algorithm for planet detection, a new algorithm complementing angular differential imaging and locally optimized combination of images (LOCI) for increasing the contrast achievable next to a bright star. The stellar point spread function (PSF) is constructed by removing linear combinations of principal components, allowing the flux from an extrasolar planet to shine through. The number of principal components used determines how well the stellar PSF is globally modeled. Using more principal components may decrease the number of speckles in the final image, but also increases the background noise. We apply PCA to Fomalhaut Very Large Telescope NaCo images acquired at 4.05 μm with an apodized phase plate. We do not detect any companions, with a model dependent upper mass limit of 13-18 M Jup from 4-10 AU. PCA achieves greater sensitivity than the LOCI algorithm for the Fomalhaut coronagraphic data by up to 1 mag. We make several adaptations to the PCA code and determine which of these prove the most effective at maximizing the signal-to-noise from a planet very close to its parent star. We demonstrate that optimizing the number of principal components used in PCA proves most effective for pulling out a planet signal.

Based on observations collected at the European Organisation for Astronomical Research in the Southern Hemisphere, Chile under program number 087.C-0901(B). 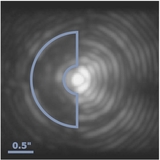