New spectroscopic observations of the LBV/WR multiple system HD 5980 in the Small Magellanic Cloud are used to address the question of the masses and evolutionary status of the two very luminous stars in the 19.3 day eclipsing binary system. Two distinct components of the N V 4944 Å line are detected in emission and their radial velocity variations are used to derive masses of 61 and 66 M ☉, under the assumption that binary interaction effects on this atomic transition are negligible. We propose that this binary system is the product of quasi-chemically homogeneous evolution with little or no mass transfer. Thus, both of these binary stars may be candidates for gamma-ray burst progenitors or even pair instability supernovae. Analysis of the photospheric absorption lines belonging to the third-light object in the system confirm that it consists of an O-type star in a 96.56 day eccentric orbit (e = 0.82) around an unseen companion. The 5:1 period ratio and high eccentricities of the two binaries suggest that they may constitute a hierarchical quadruple system. 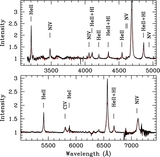