Extinction Maps toward the Milky Way Bulge: Two-dimensional and Three-dimensional Tests with APOGEE

Galactic interstellar extinction maps are powerful and necessary tools for Milky Way structure and stellar population analyses, particularly toward the heavily reddened bulge and in the midplane. However, due to the difficulty of obtaining reliable extinction measures and distances for a large number of stars that are independent of these maps, tests of their accuracy and systematics have been limited. Our goal is to assess a variety of photometric stellar extinction estimates, including both two-dimensional and three-dimensional extinction maps, using independent extinction measures based on a large spectroscopic sample of stars toward the Milky Way bulge. We employ stellar atmospheric parameters derived from high-resolution H-band Apache Point Observatory Galactic Evolution Experiment (APOGEE) spectra, combined with theoretical stellar isochrones, to calculate line-of-sight extinction and distances for a sample of more than 2400 giants toward the Milky Way bulge. We compare these extinction values to those predicted by individual near-IR and near+mid-IR stellar colors, two-dimensional bulge extinction maps, and three-dimensional extinction maps. The long baseline, near+mid-IR stellar colors are, on average, the most accurate predictors of the APOGEE extinction estimates, and the two-dimensional and three-dimensional extinction maps derived from different stellar populations along different sightlines show varying degrees of reliability. We present the results of all of the comparisons and discuss reasons for the observed discrepancies. We also demonstrate how the particular stellar atmospheric models adopted can have a strong impact on this type of analysis, and discuss related caveats. 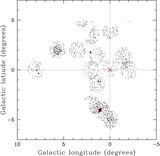