The distance to the Large Magellanic Cloud (LMC) represents a key local rung of the extragalactic distance ladder yet the galaxy's distance modulus has long been an issue of contention, in particular in view of claims that most newly determined distance moduli cluster tightly—and with a small spread—around the "canonical" distance modulus, (m - M)0 = 18.50 mag. We compiled 233 separate LMC distance determinations published between 1990 and 2013. Our analysis of the individual distance moduli, as well as of their two-year means and standard deviations resulting from this largest data set of LMC distance moduli available to date, focuses specifically on Cepheid and RR Lyrae variable-star tracer populations, as well as on distance estimates based on features in the observational Hertzsprung-Russell diagram. We conclude that strong publication bias is unlikely to have been the main driver of the majority of published LMC distance moduli. However, for a given distance tracer, the body of publications leading to the tightly clustered distances is based on highly non-independent tracer samples and analysis methods, hence leading to significant correlations among the LMC distances reported in subsequent articles. Based on a careful, weighted combination, in a statistical sense, of the main stellar population tracers, we recommend that a slightly adjusted canonical distance modulus of (m - M)0 = 18.49 ± 0.09 mag be used for all practical purposes that require a general distance scale without the need for accuracies of better than a few percent. 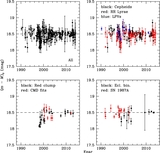