Context. A large number of low-mass (≲0.20 M⊙) helium white dwarfs (He WDs) have recently been discovered. The majority of these are orbiting another WD or a millisecond pulsar (MSP) in a close binary system; a few examples are found to show pulsations or to have a main-sequence star companion. There appear to be discrepancies between the current theoretical modelling of such low-mass He WDs and a number of key observed cases, indicating that their formation scenario yet remains to be fully understood.
Aims: Here we investigate the formation of detached proto-He WDs in close-orbit low-mass X-ray binaries (LMXBs). Our prime focus is to examine the thermal evolution and the contraction phase towards the WD cooling track and investigate how this evolution depends on the WD mass. Our calculations are then compared to the most recent observational data.
Methods: Numerical calculations with a detailed stellar evolution code were used to trace the mass-transfer phase in a large number of close-orbit LMXBs with different initial values of donor star mass, neutron star mass, orbital period, and strength of magnetic braking. Subsequently, we followed the evolution of the detached low-mass proto-He WDs, including stages with residual shell hydrogen burning and vigorous flashes caused by unstable CNO burning.
Results: We find that the time between Roche-lobe detachment until the low-mass proto-He WD reaches the WD cooling track is typically Δtproto = 0.5-2 Gyr, depending systematically on the WD mass and therefore on its luminosity. The lowest WD mass for developing shell flashes is ~0.21 M⊙ for progenitor stars of mass M2 ≤ 1.5 M⊙ (and ~0.18 M⊙ for M2 = 1.6 M⊙).
Conclusions: The long timescale of low-mass proto-He WD evolution can explain a number of recent observations, including some MSP systems hosting He WD companions with very low surface gravities and high effective temperatures. We find no evidence for Δtproto to depend on the occurrence of flashes and thus question the suggested dichotomy in thermal evolution of proto-WDs. 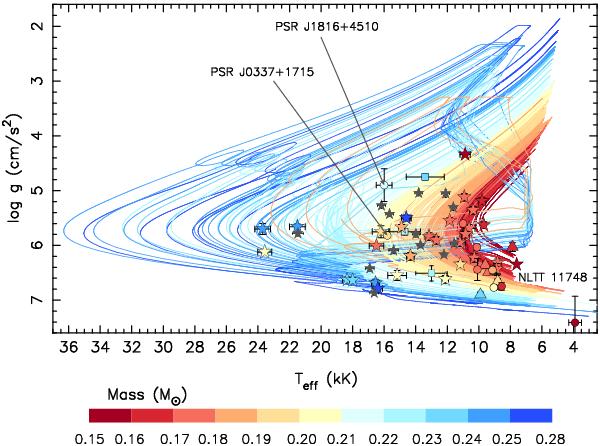