Context. The HH 54 shock is a Herbig-Haro object, located in the nearby Chamaeleon II cloud. Observed CO line profiles are due to a complex distribution in density, temperature, velocity, and geometry.
Aims: Resolving the HH 54 shock wave in the far-infrared (FIR) cooling lines of CO constrain the kinematics, morphology, and physical conditions of the shocked region.
Methods: We used the PACS and SPIRE instruments on board the Herschel space observatory to map the full FIR spectrum in a region covering the HH 54 shock wave. Complementary Herschel-HIFI, APEX, and Spitzer data are used in the analysis as well. The observed features in the line profiles are reproduced using a 3D radiative transfer model of a bow-shock, constructed with the Line Modeling Engine code (LIME).
Results: The FIR emission is confined to the HH 54 region and a coherent displacement of the location of the emission maximum of CO with increasing J is observed. The peak positions of the high-J CO lines are shifted upstream from the lower J CO lines and coincide with the position of the spectral feature identified previously in CO (10-9) profiles with HIFI. This indicates a hotter molecular component in the upstream gas with distinct dynamics. The coherent displacement with increasing J for CO is consistent with a scenario where IRAS12500 - 7658 is the exciting source of the flow, and the 180 K bow-shock is accompanied by a hot (800 K) molecular component located upstream from the apex of the shock and blueshifted by -7 km s-1. The spatial proximity of this knot to the peaks of the atomic fine-structure emission lines observed with Spitzer and PACS ([O i]63, 145 μm) suggests that it may be associated with the dissociative shock as the jet impacts slower moving gas in the HH 54 bow-shock. 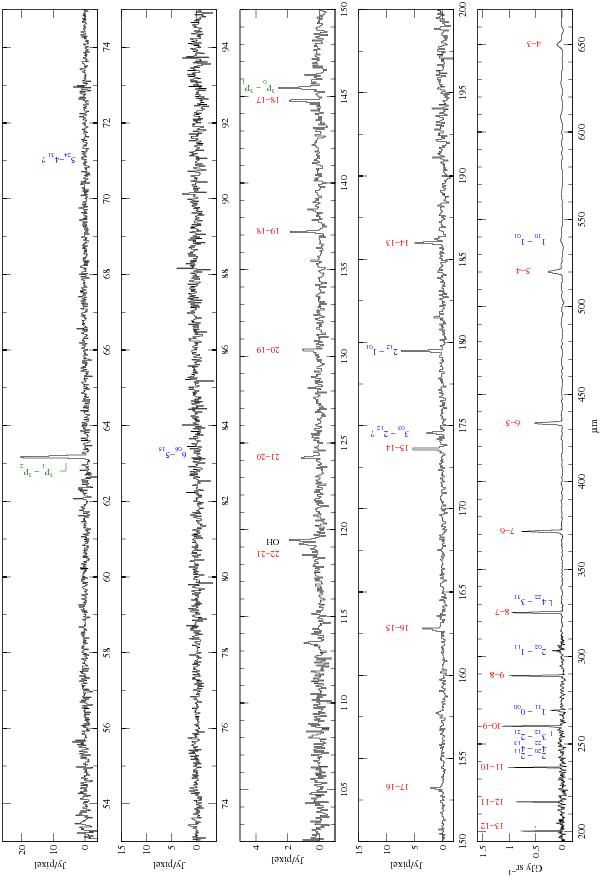