Context. Disk accretion onto weakly magnetized white dwarfs (WDs) in cataclysmic variables (CVs) leads to the formation of a boundary layer (BL) between the accretion disk and the WD, where the accreted matter loses its excess kinetic energy and angular momentum. It is assumed that angular momentum is effectively transported in the BL, but the transport mechanism is still unknown.
Aims: Here we compute detailed model spectra of recently published optically thick one-dimensional radial BL models and qualitatively compare them with observed soft X-ray/extreme ultraviolet (EUV) spectra of dwarf novae in outburst.
Methods: Every considered BL model with given effective temperature and surface density radial distribution is divided into a number of rings, and for each ring, a structure model along the vertical direction is computed using the stellar-atmosphere method. The ring spectra are then combined into a BL spectrum taking Doppler broadening and limb darkening into account.
Results: Two sets of model BL spectra are computed, the first of them consists of BL models with fixed WD mass (1 M☉) and various relative WD angular velocities (0.2, 0.4, 0.6 and 0.8 break-up velocities), while the other deals with a fixed relative angular velocity (0.8 break-up velocity) and various WD masses (0.8, 1, and 1.2 M☉). The model spectra show broad absorption features because of blending of numerous absorption lines, and emission-like features at spectral regions with only a few strong absorption lines. The model spectra are very similar to observed soft X-ray/EUV spectra of SS Cyg and U Gem in outburst. The observed SS Cyg spectrum could be fitted by BL model spectra with WD masses 0.8-1 M☉ and relative angular velocities 0.6-0.8 break up velocities. These BL models also reproduce the observed ratio of BL luminosity and disk luminosity. The difference between the observed and the BL model spectra is similar to a hot optically thin plasma spectrum and could be associated with the spectrum of outflowing plasma with a mass loss rate compatible with the BL mass accretion rate.
Conclusions: The suggested method of computing BL spectra seems very promising and can be applied to other BL models for comparison with EUV spectra of dwarf novae in outburst. 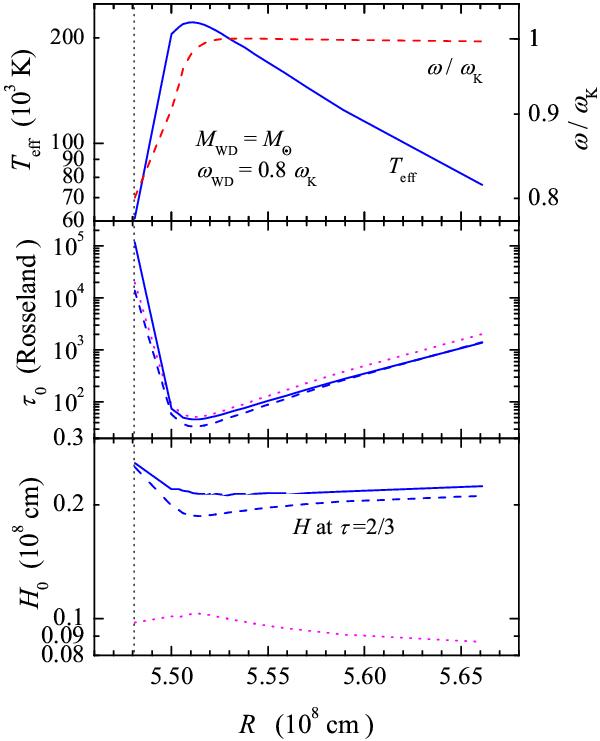