Planck 2013 results. XXIII. Isotropy and statistics of the CMB

The two fundamental assumptions of the standard cosmological model - that the initial fluctuations are statistically isotropic and Gaussian - are rigorously tested using maps of the cosmic microwave background (CMB) anisotropy from the Planck satellite. The detailed results are based on studies of four independent estimates of the CMB that are compared to simulations using a fiducial ΛCDM model and incorporating essential aspects of the Planck measurement process. Deviations from isotropy have been found and demonstrated to be robust against component separation algorithm, mask choice, and frequency dependence. Many of these anomalies were previously observed in the WMAP data, and are now confirmed at similar levels of significance (about 3σ). However, we find little evidence of non-Gaussianity, with the exception of a few statistical signatures that seem to be associated with specific anomalies. In particular, we find that the quadrupole-octopole alignment is also connected to a low observed variance in the CMB signal. A power asymmetry is now found to persist on scales corresponding to about ℓ = 600 and can be described in the low-ℓ regime by a phenomenological dipole modulation model. However, any primordial power asymmetry is strongly scale-dependent and does not extend toarbitrarily small angular scales. Finally, it is plausible that some of these features may be reflected in the angular power spectrum of the data, which shows a deficit of power on similar scales. Indeed, when the power spectra of two hemispheres defined by a preferred direction are considered separately, one shows evidence of a deficit in power, while its opposite contains oscillations between odd and even modes that may be related to the parity violation and phase correlations also detected in the data. Although these analyses represent a step forward in building an understanding of the anomalies, a satisfactory explanation based on physically motivated models is still lacking. 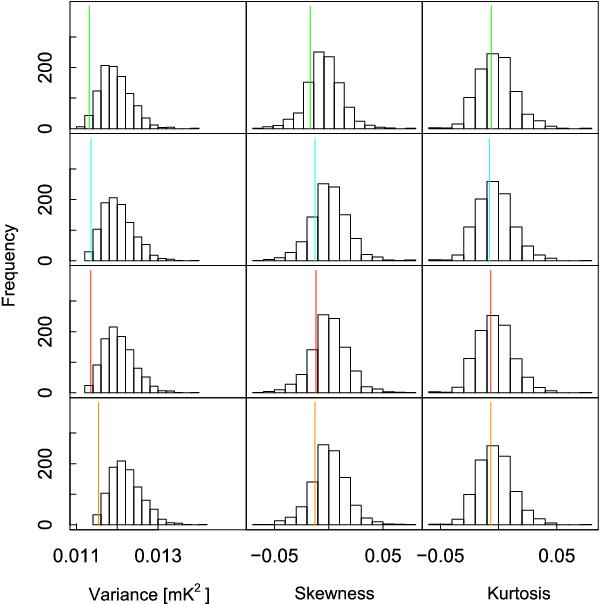