This paper presents the first cosmological results based on Planck measurements of the cosmic microwave background (CMB) temperature and lensing-potential power spectra. We find that the Planck spectra at high multipoles (ℓ ≳ 40) are extremely well described by the standard spatially-flat six-parameter ΛCDM cosmology with a power-law spectrum of adiabatic scalar perturbations. Within the context of this cosmology, the Planck data determine the cosmological parameters to high precision: the angular size of the sound horizon at recombination, the physical densities of baryons and cold dark matter, and the scalar spectral index are estimated to be θ∗ = (1.04147 ± 0.00062) × 10-2, Ωbh2 = 0.02205 ± 0.00028, Ωch2 = 0.1199 ± 0.0027, and ns = 0.9603 ± 0.0073, respectively(note that in this abstract we quote 68% errors on measured parameters and 95% upper limits on other parameters). For this cosmology, we find a low value of the Hubble constant, H0 = (67.3 ± 1.2) km s-1 Mpc-1, and a high value of the matter density parameter, Ωm = 0.315 ± 0.017. These values are in tension with recent direct measurements of H0 and the magnitude-redshift relation for Type Ia supernovae, but are in excellent agreement with geometrical constraints from baryon acoustic oscillation (BAO) surveys. Including curvature, we find that the Universe is consistent with spatial flatness to percent level precision using Planck CMB data alone. We use high-resolution CMB data together with Planck to provide greater control on extragalactic foreground components in an investigation of extensions to the six-parameter ΛCDM model. We present selected results from a large grid of cosmological models, using a range of additional astrophysical data sets in addition to Planck and high-resolution CMB data. None of these models are favoured over the standard six-parameter ΛCDM cosmology. The deviation of the scalar spectral index from unity isinsensitive to the addition of tensor modes and to changes in the matter content of the Universe. We find an upper limit of r0.002< 0.11 on the tensor-to-scalar ratio. There is no evidence for additional neutrino-like relativistic particles beyond the three families of neutrinos in the standard model. Using BAO and CMB data, we find Neff = 3.30 ± 0.27 for the effective number of relativistic degrees of freedom, and an upper limit of 0.23 eV for the sum of neutrino masses. Our results are in excellent agreement with big bang nucleosynthesis and the standard value of Neff = 3.046. We find no evidence for dynamical dark energy; using BAO and CMB data, the dark energy equation of state parameter is constrained to be w = -1.13-0.10+0.13. We also use the Planck data to set limits on a possible variation of the fine-structure constant, dark matter annihilation and primordial magnetic fields. Despite the success of the six-parameter ΛCDM model in describing the Planck data at high multipoles, we note that this cosmology does not provide a good fit to the temperature power spectrum at low multipoles. The unusual shape of the spectrum in the multipole range 20 ≲ ℓ ≲ 40 was seen previously in the WMAP data and is a real feature of the primordial CMB anisotropies. The poor fit to the spectrum at low multipoles is not of decisive significance, but is an "anomaly" in an otherwise self-consistent analysis of the Planck temperature data. 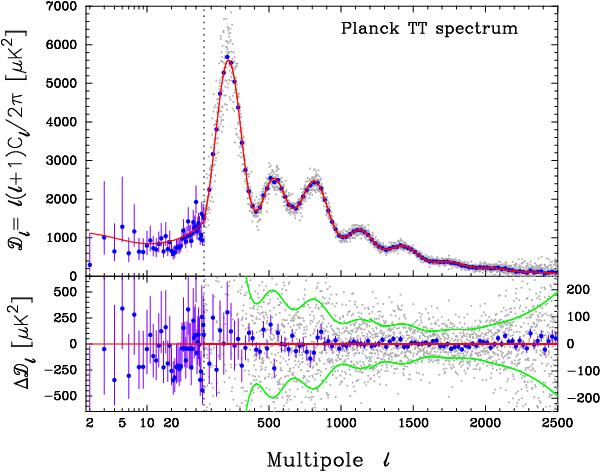