Context. Galaxies in Hickson Compact Groups (HCGs) are believed to experience morphological transformations from blue, star-forming galaxies to red, early-type galaxies. Galaxies with a high ratio between the luminosities of the warm H2 to the 7.7 μm PAH emission (so-called Molecular Hydrogen Emission Galaxies, MOHEGs) are predominantly in an intermediate phase, the green valley. Their enhanced H2 emission suggests that the molecular gas is affected in the transition.
Aims: We study the properties of the molecular gas traced by CO in galaxies in HCGs with measured warm H2 emission in order to look for evidence of the perturbations affecting the warm H2 in the kinematics, morphology and mass of the molecular gas.
Methods: We observed the CO(1-0) emission of 20 galaxies in HCGs and complemented our sample with 11 CO(1-0) spectra from the literature. Most of the galaxies have measured warm H2 emission, and 14 of them are classified as MOHEGs. We mapped some of these galaxies in order to search for extra-galactic CO emission. We analyzed the molecular gas mass derived from CO(1-0), MH2, and its kinematics, and then compared it to the mass of the warm molecular gas, the stellar mass and star formation rate (SFR).
Results: Our results are the following. (i) The mass ratio between the CO-derived and the warm H2 molecular gas is in the same range as found for field galaxies. (ii) Some of the galaxies, mostly MOHEGs, have very broad CO linewidths of up to 1000 km s-1 in the central pointing. The line shapes are irregular and show various components. (iii) In the mapped objects we found asymmetric distributions of the cold molecular gas. (iv) The star formation efficiency (=SFR/MH2) of galaxies in HCGs is very similar to isolated galaxies. No significant difference between MOHEGs and non-MOHEGs or between early-type and spiral galaxies has been found. In a few objects the SFE is significantly lower, indicating the presence of molecular gas that is not actively forming stars. (v) The molecular gas masses, MH2, and ratios MH2/LK are lower in MOHEGs (predominantly early-types) than in non-MOHEGs (predominantly spirals). This trend remains when comparing MOHEGs and non-MOHEGs of the same morphological type.
Conclusions: We found differences in the molecular gas properties of MOHEGs that support the view that they have suffered (or are presently suffering) perturbations of the molecular gas, as well as a decrease in the molecular gas content and associated SFR. Higher resolution observations of the molecular gas are needed to shed light on the nature of these perturbations and their cause. 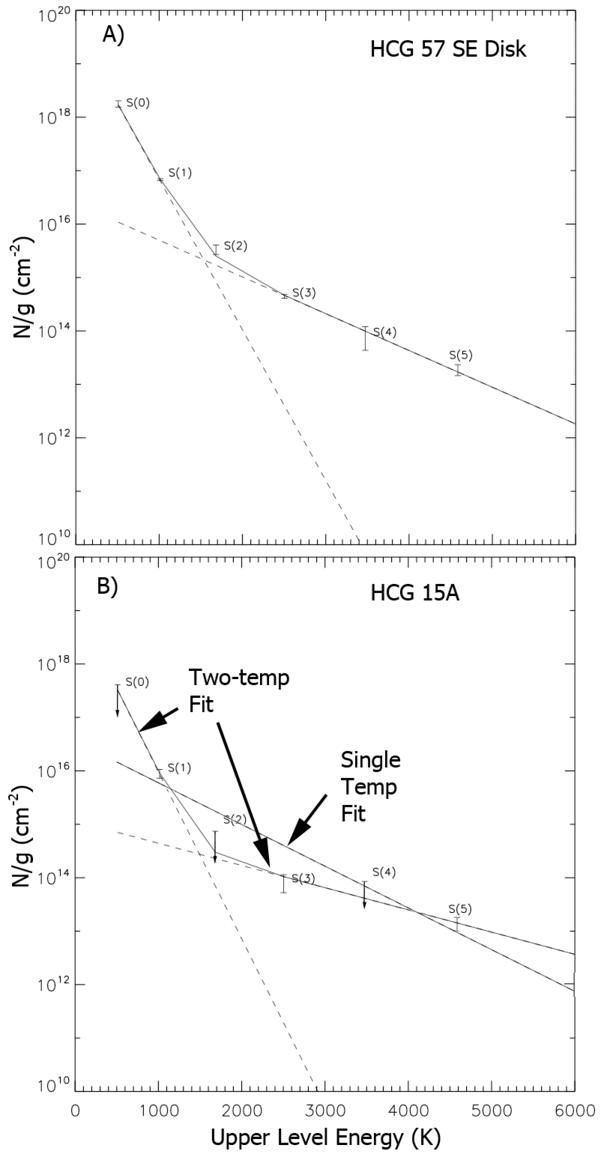