Aims: We present a new model of total solar irradiance (TSI) based on magnetograms simulated with a surface flux transport model (SFTM) and the Spectral And Total Irradiance REconstructions (SATIRE) model. Our model provides daily maps of the distribution of the photospheric field and the TSI starting from 1878.
Methods: The modelling is done in two main steps. We first calculate the magnetic flux on the solar surface emerging in active and ephemeral regions. The evolution of the magnetic flux in active regions (sunspots and faculae) is computed using a surface flux transport model fed with the observed record of sunspot group areas and positions. The magnetic flux in ephemeral regions is treated separately using the concept of overlapping cycles. We then use a version of the SATIRE model to compute the TSI. The area coverage and the distribution of different magnetic features as a function of time, which are required by SATIRE, are extracted from the simulated magnetograms and the modelled ephemeral region magnetic flux. Previously computed intensity spectra of the various types of magnetic features are employed.
Results: Our model reproduces the PMOD composite of TSI measurements starting from 1978 at daily and rotational timescales more accurately than the previous version of the SATIRE model computing TSI over this period of time. The simulated magnetograms provide a more realistic representation of the evolution of the magnetic field on the photosphere and also allow us to make use of information on the spatial distribution of the magnetic fields before the times when observed magnetograms were available. We find that the secular increase in TSI since 1878 is fairly stable to modifications of the treatment of the ephemeral region magnetic flux. 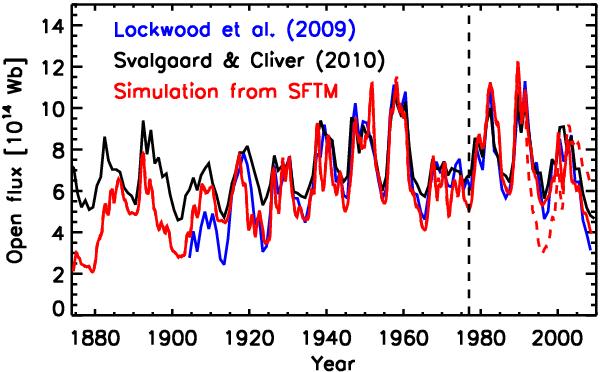