Context. The Geneva Stellar Evolution Group has recently presented an extended database of rotating stellar models at three different metallicities for nine different initial rotation parameters and ten different masses corresponding to spectral types from early-F to late-O. With these grids we have contributed to the understanding of the evolution of single rotating stars, and we intend to use them to produce synthetic stellar populations that fully account for the effects of stellar rotation. However, up to now we still lacked stellar evolutionary tracks that rotate close to the critical limit during the whole main-sequence (MS) phase. This occurs because the flat internal profile of rotation imposed at the zero-age main sequence (ZAMS) is modified by the action of meridional currents immediately after the ZAMS, causing the surface rotational velocity to decrease abruptly until it reaches a quasi-stationary state.
Aims: We compute stellar models with non-solid rotation at the ZAMS, which allows us to obtain stellar evolutionary tracks with a larger content of angular momentum that rotate close to the breakup limit throughout the whole MS.
Methods: We produced stellar models by removing the assumption that stars rotate as solid bodies at the ZAMS. We obtained the stellar structure at the ZAMS with a differentially rotating profile for three different metallicities by performing pre-MS calculations and by proposing ad hoc initial rotational profiles. We then computed the MS evolution and later phases of stellar evolution of these models, which attain rotational equatorial velocities close to the critical limit throughout their whole MS phase.
Results: Stellar models with solid rotation at the ZAMS adequately represent the overall characteristics and evolution of differentially rotating models of identical angular momentum content, but with a lower initial surface rotational velocity rate, at Z = 0.014, Z = 0.006, and Z = 0.002. For models with solid rotation at the ZAMS we therefore recommend to use as the initial rotational rate the values derived once the quasi-stationary state is reached, that is, after the abrupt decrease in surface velocity. By producing stellar structures at the ZAMS with differentially rotating profiles and larger angular momentum content than in our previous works, we obtain models that rotate close to the critical limit throughout the whole MS. These models have a longer MS lifetime and a higher surface chemical enrichment already at the end of the MS, particularly at Z = 0.002. Interestingly, the initial equatorial rotational velocities are virtually metallicity independent for all stellar models we computed in the B-type star range with the same mass and angular momentum content at the ZAMS. If, as some observational evidence indicates, B-type stars at Z = 0.002 rotate with a higher equatorial velocity at the ZAMS than stars with Z = 0.014, our finding would indicate that the angular momentum content of B-type stars in the SMC is higher than their Galactic counterparts.

Tables 1-4 are available in electronic form at http://www.aanda.org 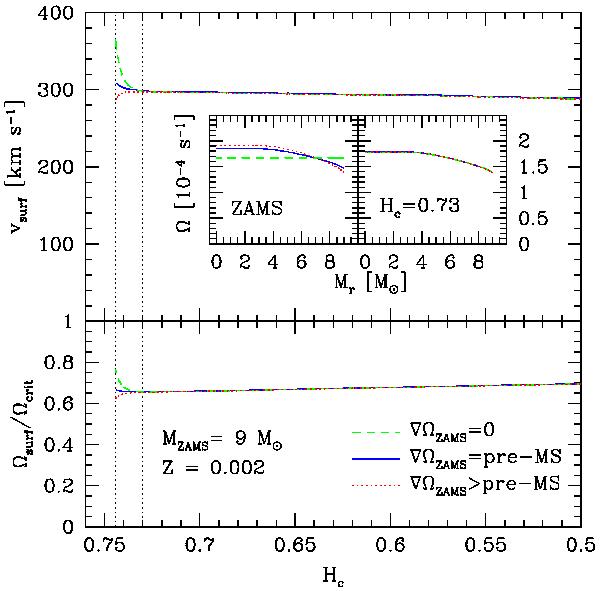