Context. Herschel observations suggest that the H2O distribution in outflows from low-mass stars resembles the H2 emission. It is still unclear which of the different excitation components that characterise the mid- and near-IR H2 distribution is associated with H2O.
Aims: The aim is to spectrally resolve the different excitation components observed in the H2 emission. This will allow us to identify the H2 counterpart associated with H2O and finally derive directly an H2O abundance estimate with respect to H2.
Methods: We present new high spectral resolution observations of H2 0-0 S(4), 0-0 S(9), and 1-0 S(1) towards HH 54, a bright nearby shock region in the southern sky. In addition, new Herschel/HIFI H2O (212 - 101) observations at 1670 GHz are presented.
Results: Our observations show for the first time a clear separation in velocity of the different H2 lines: the 0-0 S(4) line at the lowest excitation peaks at -7 km s-1, while the more excited 0-0 S(9) and 1-0 S(1) lines peak at -15 km s-1. H2O and high-J CO appear to be associated with the H2 0-0 S(4) emission, which traces a gas component with a temperature of 700-1000 K. The H2O abundance with respect to H2 0-0 S(4) is estimated to be X(H2O) < 1.4 × 10-5 in the shocked gas over an area of 13''.
Conclusions: We resolve two distinct gas components associated with the HH 54 shock region at different velocities and excitations. This allows us to constrain the temperature of the H2O emitting gas (≤1000 K) and to derive correct estimates of H2O abundance in the shocked gas, which is lower than what is expected from shock model predictions.

Based on observations made with ESO telescopes at the La Silla Paranal Observatory under programme IDs: 089.C-0772, 292.C-5025. 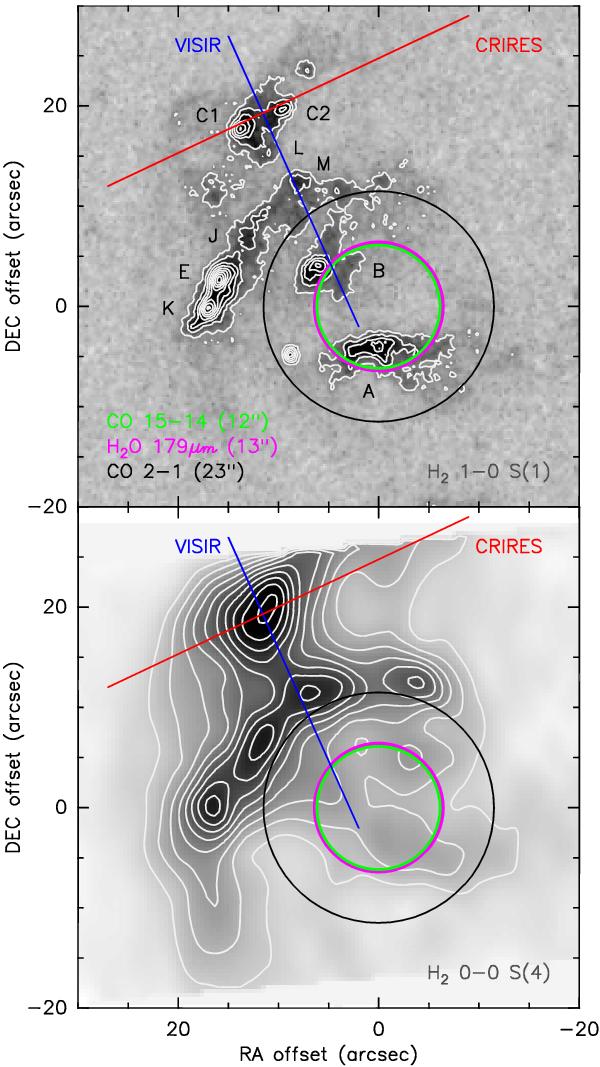