PG 1159 stars are very hot (effective temperatures Teff = 75 000-200 000 K), hydrogen-deficient (pre-) white dwarfs. They probably are the result of a late helium-shell flash that laid bare the He, C, and O rich intershell matter of the progenitor Asymptotic Giant Branch (AGB) star. Their chemical surface composition thus allows to conclude on details of AGB-star nucleosynthesis. Due to their very high effective temperatures, detailed spectral analyses are usually completely reliant on ultraviolet observations, except for some species in the hottest PG 1159 stars (Teff ≳ 130 000 K), which do exhibit highly excited lines from the CNO elements and neon (C iv, N v, O vi, Ne vii-viii) in optical spectra. Particularly problematic are, however, the coolest members of the PG 1159 class that exclusively show C iv lines in the optical. Access to the nitrogen abundance is important to decide which of the late-thermal pulse evolutionary scenarios was experienced by a particular star, while a high oxygen abundance is an important marker that the star could pulsate. In the present paper, we investigate high-resolution high signal-to-noise optical spectra of three "cool" PG 1159 stars (PG 0122+200, PG 2131+066, MCT 0130-1937, Teff = 80 000-95 000 K). With the help of non-LTE model atmospheres and synthetic spectra, we are able to identify a large number of weak CNO lines (C iii, N iv, O iii-v) that were not detected before in these stars. They allow abundance determinations and enable us to constrain the effective temperature to high precision through ionization equilibria without the requirement to access the ultraviolet spectral range. 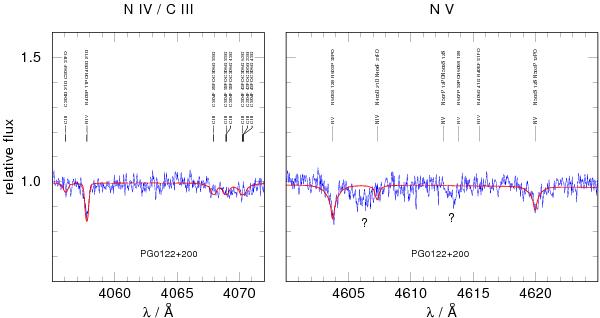