, a pulsating M1 supergiant at the Galactic centre . Physical properties and age

Context. The stellar population in the central parsec of the Galaxy is dominated in mass and number by an old (several Gyr) population, but young (6 ± 2 Myr), massive stars dominate the luminosity function. The most luminous of these stars is an M1 supergiant, .
Aims: We have studied in order to constrain the age of the recent star formation event in the Galactic centre and to characterise it as a visibility and phase reference for observations of the Galactic centre with the interferometric instrument GRAVITY, which will equip the Very Large Telescope Interferometer (VLTI) in the near future.
Methods: We present the first H-band interferometric observations of , obtained using the PIONIER visitor instrument on the VLTI using the four 8.2-m unit telescopes. In addition, we present unpublished K-band VLTI/AMBER data and build JHKL light curves based on archival data spanning almost 40 years, and measured the star's effective temperature using SINFONI integral field spectroscopy.
Results: is marginally resolved in the H band with a uniform-disk diameter θUD(2013) = 1.076 ± 0.093 mas (RUD(2013) = 960 ± 92 R⊙ at 8.33 ± 0.35 kpc). We detect a significant circumstellar contribution in the K band. The star and its environment are variable in brightness and in size. The photospheric H-band variations are modelled well with two periods: P0 ≃ 470 ± 10 days (amplitude ≃0.64 mag) and long secondary period PLSP ≃ 2700 - 2850 days (amplitude ≃1.1 mag). As measured from 12CO equivalent width, ⟨Teff⟩ = 3600 ± 195 K.
Conclusions: The size, periods, luminosity (⟨Mbol⟩ = -8.44 ± 0.22), and effective temperature are consistent with an M1 supergiant with an initial mass of 22.5 ± 2.5 M⊙ and an age of 6.5-10 Myr (depending on rotation). This age is in remarkable agreement with most estimates for the recent star formation event in the central parsec. Caution should be taken when using this star as a phase reference or visibility calibrator because it is variable in size, is surrounded by a variable circumstellar environment, and large convection cells may form on its photosphere. 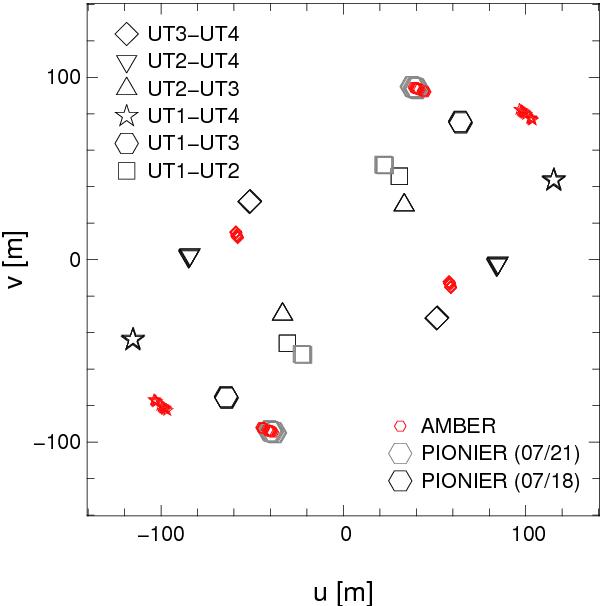