The Mice at play in the CALIFA survey. A case study of a gas-rich major merger between first passage and coalescence

We present optical integral field spectroscopy (IFS) observations of the Mice, a major merger between two massive (≳1011 M⊙) gas-rich spirals NGC 4676A and B, observed between first passage and final coalescence. The spectra provide stellar and gas kinematics, ionised gas properties, and stellar population diagnostics, over the full optical extent of both galaxies with ~1.6 kpc spatial resolution. The Mice galaxies provide a perfect case study that highlights the importance of IFS data for improving our understanding of local galaxies. The impact of first passage on the kinematics of the stars and gas has been significant, with strong bars most likely induced in both galaxies. The barred spiral NGC 4676B exhibits a strong twist in both its stellar and ionised gas disk. The edge-on disk galaxy NGC 4676A appears to be bulge free, with a strong bar causing its "boxy" light profile. On the other hand, the impact of the merger on the stellar populations has been minimal thus far. By combining the IFS data with archival multiwavelength observations we show that star formation induced by the recent close passage has not contributed significantly to the total star formation rate or stellar mass of the galaxies. Both galaxies show bicones of high ionisation gas extending along their minor axes. In NGC 4676A the high gas velocity dispersion and Seyfert-like line ratios at large scaleheight indicate a powerful outflow. Fast shocks (vs ~ 350 km s-1) extend to ~6.6 kpc above the disk plane. The measured ram pressure (P/k = 4.8 × 106 K cm-3) and mass outflow rate (~8-20 M⊙ yr-1) are similar to superwinds from local ultra-luminous infrared galaxies, although NGC 4676A only has a moderate infrared luminosity of 3 × 1010 L⊙. Energy beyond what is provided by the mechanical energy of the starburst appears to be required to drive the outflow. Finally, we compare the observations to mock kinematic and stellar population maps extracted from a hydrodynamical merger simulation. The models show little enhancement in star formation during and following first passage, in agreement with the observations. We highlight areas where IFS data could help further constrain the models. 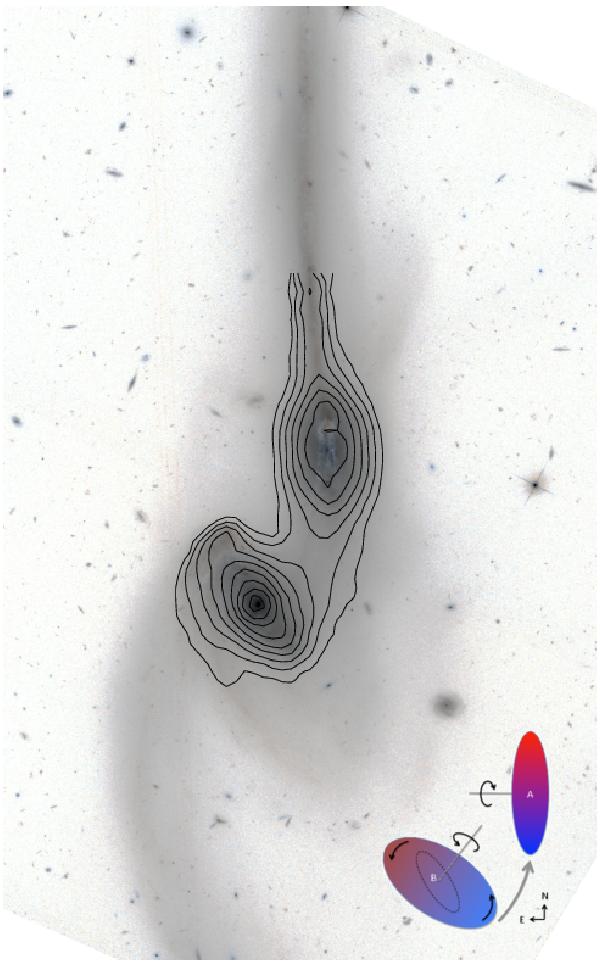