Confirmation of an exoplanet using the transit color signature: Kepler-418b, a blended giant planet in a multiplanet system


Aims: We announce confirmation of Kepler-418b, one of two proposed planets in this system. This is the first confirmation of an exoplanet based primarily on the transit color signature technique.
Methods: We used the Kepler public data archive combined with multicolor photometry from the Gran Telescopio de Canarias and radial velocity follow-up using FIES at the Nordic Optical Telescope for confirmation.
Results: We report a confident detection of a transit color signature that can only be explained by a compact occulting body, entirely ruling out a contaminating eclipsing binary, a hierarchical triple, or a grazing eclipsing binary. Those findings are corroborated by our radial velocity measurements, which put an upper limit of ~1 MJup on the mass of Kepler-418b. We also report that the host star is significantly blended, confirming the ~10% light contamination suspected from the crowding metric in the Kepler light curve measured by the Kepler team. We report detection of an unresolved light source that contributes an additional ~30% to the target star, which would not have been detected without multicolor photometric analysis. The resulting planet-star radius ratio is 0.110 ± 0.0025, more than 25% more than the 0.087 measured by Kepler leading to a radius of 1.20 ± 0.16 RJup instead of the 0.94 RJup measured by the Kepler team.
Conclusions: This is the first confirmation of an exoplanet candidate based primarily on the transit color signature, demonstrating that this technique is viable from ground for giant planets. It is particularly useful for planets with long periods such as Kepler-418b, which tend to have long transit durations. While this technique is limited to candidates with deep transits from the ground, it may be possible to confirm earth-like exoplanet candidates with a few hours of observing time with an instrument like the James Webb Space Telescope. Additionally, multicolor photometric analysis of transits can reveal unknown stellar neighbors and binary companions that do not affect the classification of the transiting object but can have a very significant effect on the perceived planetary radius. 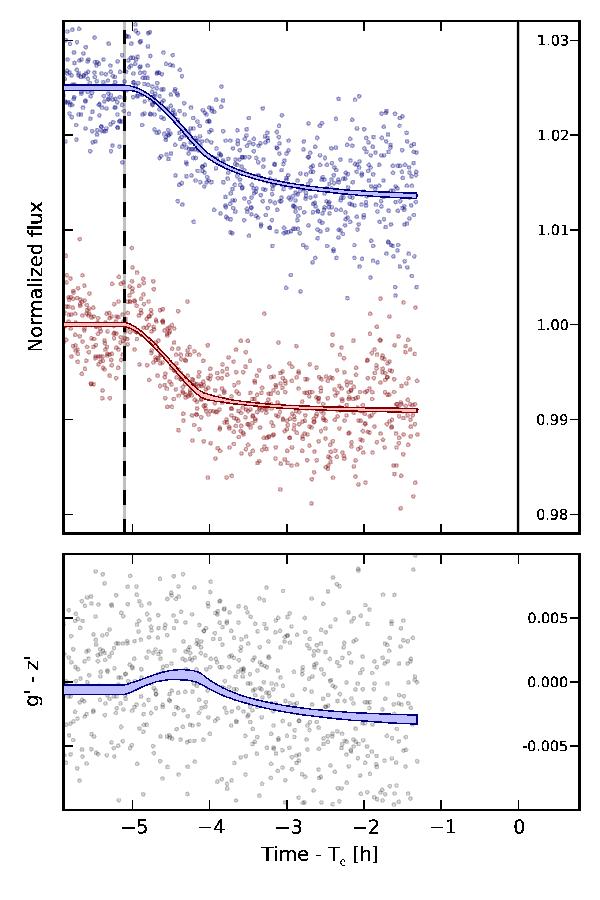