The 12CO/13CO ratio in AGB stars of different chemical type. Connection to the 12C/13C ratio and the evolution along the AGB


Aims: The aim of this paper is to investigate the evolution of the 12C/13C ratio along the AGB through the circumstellar 12CO/13CO abundance ratio. This is the first time a sample including a significant number of M- and S-type stars is analysed together with a carbon-star sample of equal size, making it possible to investigate trends among the different types and establish evolutionary effects.
Methods: The circumstellar 12CO/13CO abundance ratios are estimated through a detailed radiative transfer analysis of single-dish radio line emission observations. Several different transitions have been observed for each source to ensure that a large extent of the circumstellar envelope is probed and the radiative transfer model is well constrained. The radiative transfer model is based on the Monte Carlo method and has been benchmarked against a set of similar codes. It assumes that the radiation field is non-local and solves the statistical equilibrium equations in full non-local thermodynamic equilibrium. The energy balance equation, determining the gas temperature distribution, is solved self-consistently, and the effects of thermal dust radiation (as estimated from the spectral energy distribution) are taken into account. First, the 12CO radiative transfer is solved, assuming an abundance (dependent on the chemical type of the star), to give the physical parameters of the gas, i.e. mass-loss rate, Ṁ, gas expansion velocity, υe, and gas temperature distribution. Then, the 13CO radiative transfer is solved using the results of the 12CO model giving the 13CO abundance. Finally, the 12CO/13CO abundance ratio is calculated.
Results: The circumstellar 12CO/13CO abundance ratio differs between the three spectral types. This is consistent with what is expected from stellar evolutionary models assuming that the spectral types constitute an evolutionary sequence; however, this is the first time this has been shown observationally for a relatively large sample covering all three spectral types. The median value of the 13CO abundance in the inner circumstellar envelope is 1.6 × 10-5, 2.3 × 10-5, and 3.0 × 10-5 for the M-type, S-type, and carbon stars of the sample, respectively, corresponding to 12CO/13CO abundance ratios of 13, 26, and 34, respectively. The spread in the 13CO abundance, quantified by the ratio between the 90th and 10th percentile, is 4, 3, and 15 for the M-type, S-type, and carbon stars, respectively. Interestingly, the abundance ratio spread of the carbon stars is much larger than for the M- and S-type stars, even when excluding J-type carbon stars, in line with what could be expected from evolution on the AGB. We find no correlation between the isotopologue ratio and the mass-loss rate, as would be expected if both increase as the star evolves. 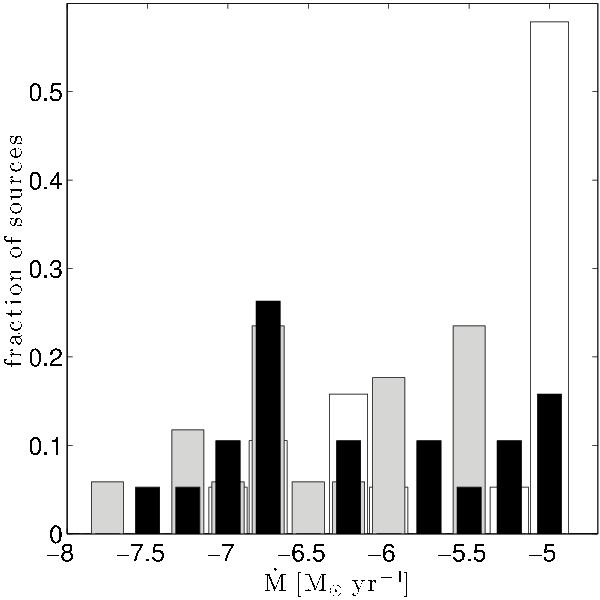