The properties of planets around giant stars

Context. More than 50 exoplanets have been found around giant stars, revealing different properties when compared to planets orbiting solar-type stars. In particular, they are super-Jupiters and are not found orbiting interior to ~0.5 AU.
Aims: We are conducting a radial velocity study of a sample of 166 giant stars aimed at studying the population of close-in planets orbiting giant stars and how their orbital and physical properties are influenced by the post-MS evolution of the host star.
Methods: We have collected multiepoch spectra for all of the targets in our sample. We have computed precision radial velocities from FECH/CHIRON and FEROS spectra, using the I2 cell technique and the simultaneous calibration method, respectively.
Results: We present the discovery of a massive planet around the giant star HIP 105854. The best Keplerian fit to the data leads to an orbital distance of 0.81 ± 0.03 AU, an eccentricity of 0.02 ± 0.03 and a projected mass of 8.2 ± 0.2 MJ. With the addition of this new planet discovery, we performed a detailed analysis of the orbital properties and mass distribution of the planets orbiting giant stars. We show that there is an overabundance of planets around giant stars with a ~ 0.5 - 0.9 AU, which might be attributed to tidal decay. Additionally, these planets are significantly more massive than those around MS and subgiant stars, suggesting that they grow via accretion either from the stellar wind or by mass transfer from the host star. Finally, we show that planets around evolved stars have lower orbital eccentricities than those orbiting solar-type stars, which suggests that they are either formed in different conditions or that their orbits are efficiently circularized by interactions with the host star. 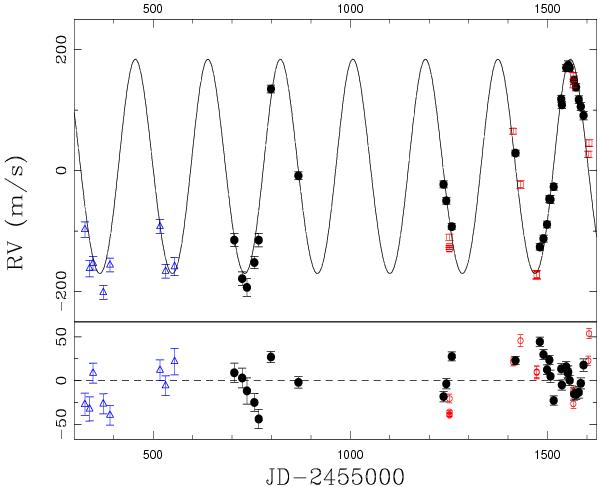