Context. The Kepler mission has discovered thousands of planet candidates. Currently, some of them have already been discarded; more than 200 have been confirmed by follow-up observations (most by radial velocity and few by other methods), and several hundreds have been validated. However, the large majority of the candidates are still awaiting for confirmation. Thus, priorities (in terms of the probability of the candidate being a real planet) must be established for subsequent radial velocity observations.
Aims: The motivation of this work is to provide a set of isolated (good) host candidates to be further tested by other techniques that allow confirmation of the planet. As a complementary goal, we aim to identify close companions of the candidates that could have contaminated the light curve of the planet host due to the large pixel size of the Kepler CCD and its typical PSF of around 6 arcsec. Both goals can also provide robust statistics about the multiplicity of the Kepler hosts.
Methods: We used the AstraLux North instrument located at the 2.2 m telescope in the Calar Alto Observatory (Almería, Spain) to obtain diffraction-limited images of 174 Kepler objects of interest. A sample of demoted Kepler objects of interest (with rejected planet candidates) is used as a control for comparison of multiplicity statistics. The lucky-imaging technique used in this work is compared to other adaptive optics and speckle imaging observations of Kepler planet host candidates. To that end, we define a new parameter, the blended source confidence level (BSC), to assess the probability of an object to have blended non-detected eclipsing binaries capable of producing the detected transit.
Results: We find that 67.2% of the observed Kepler hosts are isolated within our detectability limits, and 32.8% have at least one visual companion at angular separations below 6 arcsec. Indeed, we find close companions (below 3 arcsec) for the 17.2% of the sample. The planet properties of this sample of non-isolated hosts are revised according to the presence of such close companions. We report one possible S-type binary (KOI-3158), where the five planet candidates would orbit one of the components of the system. We also report three possible false positives (KOIs 1230.01, 3649.01, and 3886.01) due to the presence of close companions that modify candidate properties such that they cannot be considered as planets anymore. The BSC parameter is calculated for all the isolated targets and compared to both the value prior to any high-resolution image and, when possible, to observations from previous high-spatial resolution surveys in the Kepler sample. 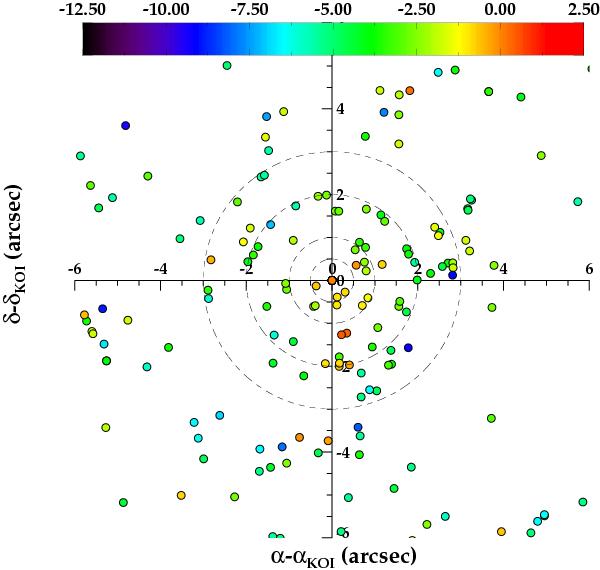