Aims: The aim of our paper is to investigate the low-amplitude and long-period variations in evolved stars with a precise radial velocity survey.
Methods: The high-resolution, the fiber-fed Bohyunsan Observatory Echelle Spectrograph (BOES) was used from 2003 to 2013 for a radial velocity survey of giant stars as part of the exoplanet search program at Bohyunsan Optical Astronomy Observatory (BOAO).
Results: We report the detection of three new planetary companions orbiting the K giants β Cnc, μ Leo, and β UMi. The planetary nature of the radial velocity variations is supported by analyzes of ancillary data. The Hipparcos photometry shows no variations with periods close to those in radial velocity variations and there is no strong correlation between the bisector velocity span (BVS) and the radial velocities for each star. Furthermore, the stars show weak or no core reversal in Ca II H lines indicating that they are inactive stars. The companion to β Cnc has a minimum mass of 7.8 MJup in a 605-day orbit with an eccentricity of 0.08. The giant μ Leo is orbited by a companion of minimum mass of 2.4 MJup having a period of 357 days and an eccentricity of 0.09. The giant β UMi is a known barium star and is suspected of harboring a white dwarf or substellar mass companion. Its companion has a minimum mass of 6.1 MJup, a period of 522 days, and an eccentricity e = 0.19. 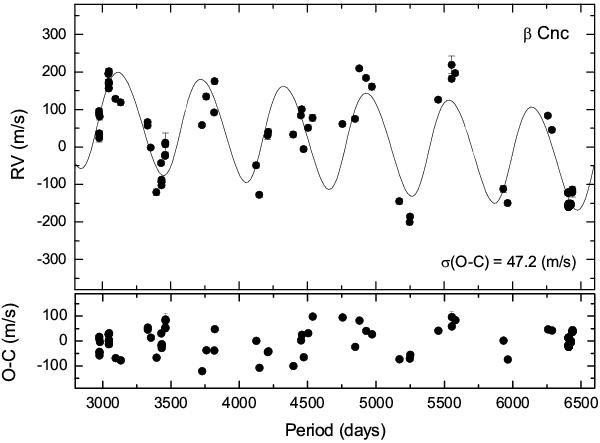