A hidden reservoir of Fe/FeS in interstellar silicates?

Context. The depletion of iron and sulphur into dust in the interstellar medium and the exact nature of interstellar amorphous silicate grains is still an open question.
Aims: We study the incorporation of iron and sulphur into amorphous silicates of olivine- and pyroxene-types and their effects on the dust spectroscopy and thermal emission.
Methods: We used the Maxwell-Garnett effective-medium theory to construct the optical constants for a mixture of silicates, metallic iron, and iron sulphide. We also studied the effects of iron and iron sulphide in aggregate grains.
Results: Iron sulphide inclusions within amorphous silicates that contain iron metal inclusions show no strong differences in the optical properties of the grains. A mix of amorphous olivine- and pyroxene-type silicate broadens the silicate features. An amorphous carbon mantle with a thickness of 10 nm on the silicate grains leads to an increase in absorption on the short-wavelength side of the 10 μm silicate band.
Conclusions: The assumption of amorphous olivine-type and pyroxene-type silicates and a 10 nm thick amorphous carbon mantle better matches the interstellar silicate band profiles. Including iron nano-particles leads to an increase in the mid-IR extinction, while up to 5 ppm of sulphur can be incorporated as Fe/FeS nano inclusions into silicate grains without leaving a significant trace of its presence. 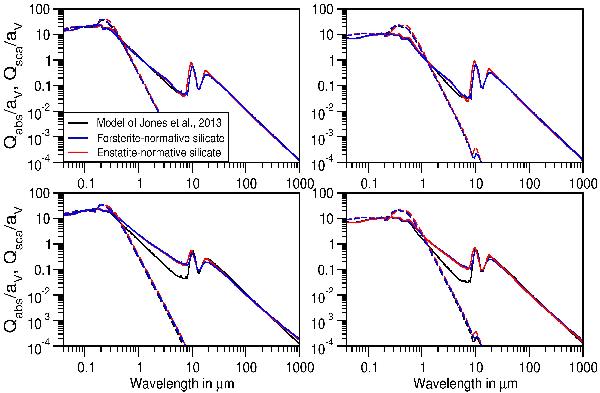