The rise and fall of the Type Ib supernova iPTF13bvn. Not a massive Wolf-Rayet star

Context. We investigate iPTF13bvn, a core-collapse (CC) supernova (SN) in the nearby spiral galaxy NGC 5806. This object was discovered by the intermediate Palomar Transient Factory (iPTF) very close to the estimated explosion date and was classified as a stripped-envelope CC SN, likely of Type Ib. Furthermore, a possible progenitor detection in pre-explosion Hubble Space Telescope (HST) images was reported, making this the only SN Ib with such an identification. Based on the luminosity and color of the progenitor candidate, as well as on early-time spectra and photometry of the SN, it was argued that the progenitor candidate is consistent with a single, massive Wolf-Rayet (WR) star.
Aims: We aim to confirm the progenitor detection, to robustly classify the SN using additional spectroscopy, and to investigate if our follow-up photometric and spectroscopic data on iPTF13bvn are consistent with a single-star WR progenitor scenario.
Methods: We present a large set of observational data, consisting of multi-band light curves (UBVRI, g'r'i'z') and optical spectra. We perform standard spectral line analysis to track the evolution of the SN ejecta. We also construct a bolometric light curve and perform hydrodynamical calculations to model this light curve to constrain the synthesized radioactive nickel mass and the total ejecta mass of the SN. Late-time photometry is analyzed to constrain the amount of oxygen. Furthermore, image registration of pre- and post-explosion HST images is performed.
Results: Our HST astrometry confirms the location of the progenitor candidate of iPTF13bvn, and follow-up spectra securely classify this as a SN Ib. We use our hydrodynamical model to fit the observed bolometric light curve, estimating the total ejecta mass to be 1.9 M☉ and the radioactive nickel mass to be 0.05 M☉. The model fit requires the nickel synthesized in the explosion to be highly mixed out in the ejecta. We also find that the late-time nebular r'-band luminosity is not consistent with predictions based on the expected oxygen nucleosynthesis in very massive stars.
Conclusions: We find that our bolometric light curve of iPTF13bvn is not consistent with the previously proposed single massive WR-star progenitor scenario. The total ejecta mass and, in particular, the late-time oxygen emission are both significantly lower than what would be expected from a single WR progenitor with a main-sequence mass of at least 30 M☉. 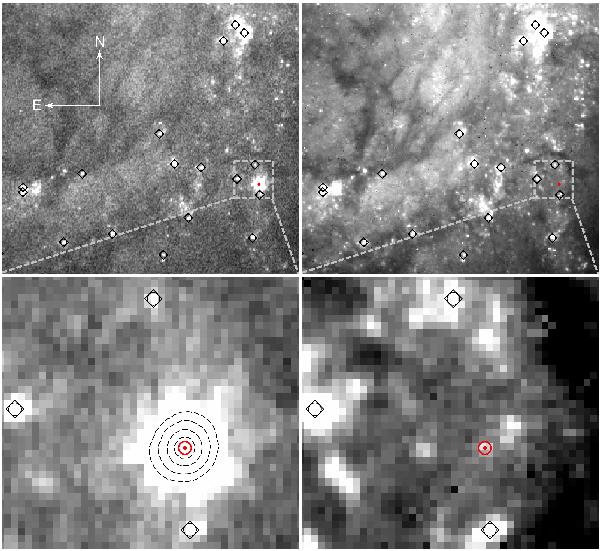