The Wolf-Rayet stars in the Large Magellanic Cloud. A comprehensive analysis of the WN class

Context. Massive stars, although being important building blocks of galaxies, are still not fully understood. This especially holds true for Wolf-Rayet (WR) stars with their strong mass loss, whose spectral analysis requires adequate model atmospheres.
Aims: Following our comprehensive studies of the WR stars in the Milky Way, we now present spectroscopic analyses of almost all known WN stars in the LMC.
Methods: For the quantitative analysis of the wind-dominated emission-line spectra, we employ the Potsdam Wolf-Rayet (PoWR) model atmosphere code. By fitting synthetic spectra to the observed spectral energy distribution and the available spectra (ultraviolet and optical), we obtain the physical properties of 107 stars.
Results: We present the fundamental stellar and wind parameters for an almost complete sample of WN stars in the LMC. Among those stars that are putatively single, two different groups can be clearly distinguished. While 12% of our sample are more luminous than 106L⊙ and contain a significant amount of hydrogen, 88% of the WN stars, with little or no hydrogen, populate the luminosity range between log (L/L⊙) = 5.3 ... 5.8.
Conclusions: While the few extremely luminous stars (log (L/L⊙) > 6), if indeed single stars, descended directly from the main sequence at very high initial masses, the bulk of WN stars have gone through the red-supergiant phase. According to their luminosities in the range of log (L/L⊙) = 5.3 ... 5.8, these stars originate from initial masses between 20 and 40 M⊙. This mass range is similar to the one found in the Galaxy, i.e. the expected metallicity dependence of the evolution is not seen. Current stellar evolution tracks, even when accounting for rotationally induced mixing, still partly fail to reproduce the observed ranges of luminosities and initial masses. Moreover, stellar radii are generally larger and effective temperatures correspondingly lower than predicted from stellar evolution models, probably due to subphotospheric inflation.

Partly based on observations made with the NASA/ESA Hubble Space Telescope, and obtained from the Hubble Legacy Archive, which is a collaboration between the Space Telescope Science Institute (STScI/NASA), the Space Telescope European Coordinating Facility (ST-ECF/ESA), and the Canadian Astronomy Data Centre (CADC/NRC/CSA).Appendices A-C are available in electronic form at http://www.aanda.org 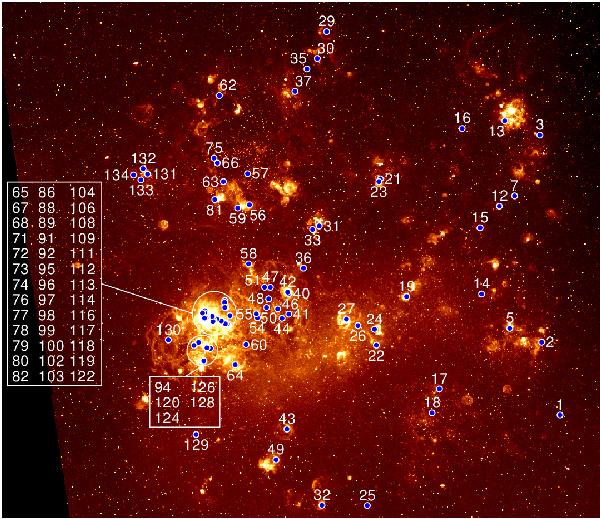