Ground-based transit observations of the super-Earth GJ 1214 b

Context. GJ 1214 b is one of the few known transiting super-Earth-sized exoplanets with a measured mass and radius. It orbits an M-dwarf, only 14.55 pc away, making it a favorable candidate for follow-up studies. However, the composition of GJ 1214 b's mysterious atmosphere has yet to be fully unveiled.
Aims: Our goal is to distinguish between the various proposed atmospheric models to explain the properties of GJ 1214 b: hydrogen-rich or hydrogen-He mix, or a heavy molecular weight atmosphere with reflecting high clouds, as latest studies have suggested.
Methods: Wavelength-dependent planetary radii measurements from the transit depths in the optical/NIR are the best tool to investigate the atmosphere of GJ 1214 b. We present here (i) photometric transit observations with a narrow-band filter centered on 2.14 μm and a broad-band I-Bessel filter centered on 0.8665 μm, and (ii) transmission spectroscopy in the H and K atmospheric windows that cover three transits. The photometric and spectrophotometric time series obtained were analyzed with MCMC simulations to measure the planetary radii as a function of wavelength. We determined radii ratios of 0.1173-0.0024+0.0022 for I-Bessel and 0.11735-0.00076+0.00072 at 2.14 μm.
Results: Our measurements indicate a flat transmission spectrum, in agreement with the last atmospheric models that favor featureless spectra with clouds and high molecular weight compositions.

Based on observations obtained at the Southern Astrophysical Research (SOAR) Telescope, which is a joint project of the Ministério da Ciência, Tecnologia, e Inovação (MCTI) da República Federativa do Brasil, the US National Optical Astronomy Observatory (NOAO), the University of North Carolina at Chapel Hill (UNC), and Michigan State University (MSU). SofI results are based on observations made with ESO Telescopes at the La Silla Paranal Observatory under programme ID 087.C-0509.Tables of the lightcurve data are only available at the CDS via anonymous ftp to http://cdsarc.u-strasbg.fr (ftp://130.79.128.5) or via http://cdsarc.u-strasbg.fr/viz-bin/qcat?J/A+A/565/A7 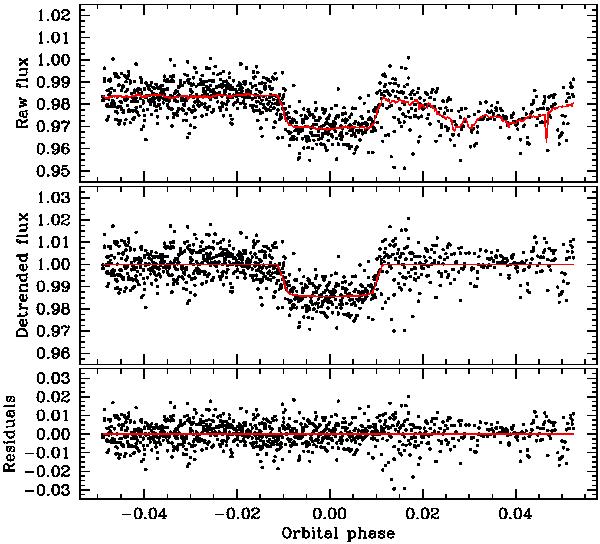