Context. The non-Maxwellian κ-distributions have been detected in the solar wind and can explain intensities of some transition region lines. Presence of such distributions in the outer layers of the solar atmosphere influences the ionization and excitation equilibrium and widens the line contribution functions. This behavior may be reflected on the reconstructed differential emission measure (DEM).
Aims: We aim to investigate the influence of κ-distributions on the reconstructed DEMs.
Methods: We perform DEM reconstruction for three active region cores and a quiet Sun region using the Withbroe-Sylwester method and the regularization method.
Results: We find that the reconstructed DEMs depend on the value of κ. The DEMs of the active region cores show similar behavior with decreasing κ, or an increasing departure from the Maxwellian distribution. For lower κ, the peaks of the DEMs are typically shifted to higher temperatures and the DEMs themselves become more concave. This is caused by the less steep high-temperature slopes for lower κ. However, the low-temperature slopes do not change significantly even for extremely low κ. The behavior of the quiet-Sun DEM distribution is different. It becomes progressively less multithermal for lower κ with the EM-loci plots that indicate near-isothermal plasma for κ = 2.
Conclusions: The κ-distributions can influence the reconstructed DEMs. The slopes of the DEM, however, do not change with κ significantly enough to produce different constraints on the heating mechanism in terms of frequency of coronal heating events. 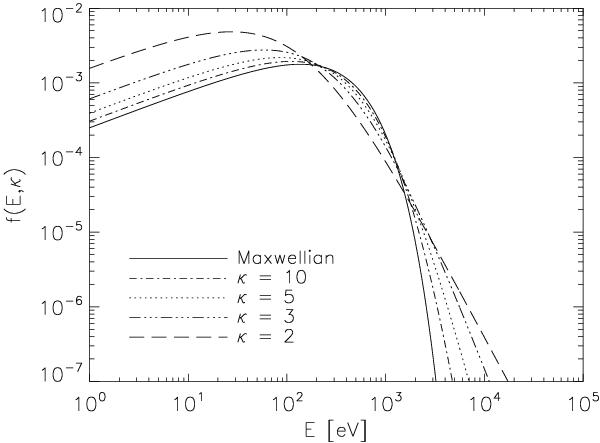