Context. The chemically peculiar (CP) stars of the upper main sequence are mainly characterized by strong overabundances of heavy elements. Two subgroups (CP2 and CP4) have strong local magnetic fields which make them interesting targets for astrophysical studies. This star group, in general, is often used for the analysis of stellar formation and evolution in the context of diffusion as well as meridional circulation.
Aims: In continuation of a long term study of CP stars (initiated in the 1980s), we present new results based on photoelectric measurements for ten open clusters that are, with one exception, younger than 235 Myr. Observations in star clusters are favourable because they represent samples of stars of constant age and homogeneous chemical composition.
Methods: The very efficient tool of Δa photometry was applied. It samples the flux depression at 5200 Å typically for CP stars. In addition, it is able to trace emission line Be/Ae and λ Bootis stars. Virtually all CP2 and CP4 stars can be detected via this tool, and it has been successfully applied even in the Large Magellanic Cloud. For all targets in the cluster areas, we performed a kinematic membership analysis.
Results: We obtained new photoelectric Δa photometry of 304 stars from which 207 objects have a membership probability higher than 50%. Our search for chemically peculiar objects results in fifteen detections. The stars have masses between 1.7 M⊙ and 7.7 M⊙ and are between the zero- and terminal-age-main-sequence. We discuss the published spectral classifications in the light of our Δa photometry and identify several misclassified CP stars. We are also able to establish and support the nature of known bona fide CP candidates.
Conclusions: It is vital to use kinematic data for the membership determination and also to compare published spectral types with other data, such as Δa photometry. There are no doubts about the accuracy of photoelectric measurements, especially for stars brighter than 10th magnitude. The new and confirmed CP stars are interesting targets for spectroscopic follow-up observations to put constraints on the formation and evolution of CP stars. 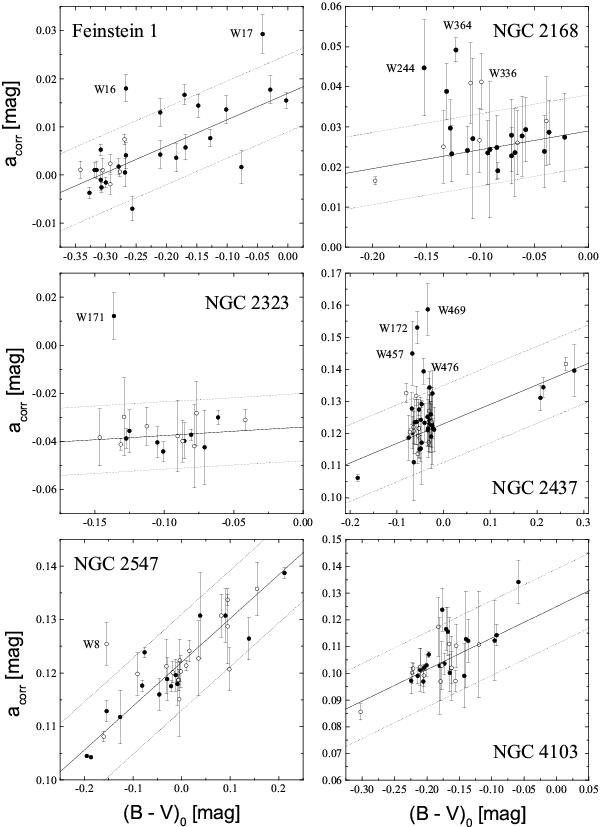