The VLT-FLAMES Tarantula Survey. XIII: On the nature of O Vz stars in 30 Doradus

Context. O Vz stars, a subclass of O-type dwarfs characterized by having He ii λ4686 stronger in absorption than any other helium line in their blue-violet spectra, have been suggested to be on or near the zero-age main sequence (ZAMS). If their youth were confirmed, they would be key objects with which to advance our knowledge of the physical properties of massive stars in the early stages of their lives.
Aims: We test the hypothesis of O Vz stars being at a different (younger) evolutionary stage than are normal O-type dwarfs.
Methods: We have performed the first comprehensive quantitative spectroscopic analysis of a statistically meaningful sample of O Vz and O V stars in the same star-forming region, exploiting the large number of O Vz stars identified by the VLT-FLAMES Tarantula Survey in the 30 Doradus region of the Large Magellanic Cloud (LMC). We obtained the stellar and wind parameters of 38 O Vz stars (and a control sample of 46 O V stars) using the FASTWIND stellar atmosphere code and the IACOB-GBAT, a grid-based tool developed for automated quantitative analysis of optical spectra of O stars. In the framework of a differential study, we compared the physical and evolutionary properties of both samples, locating the stars in the log g vs. log Teff, log Q vs. log Teff, and log L/L⊙ vs. log Teff diagrams. We also investigated the predictions of the FASTWIND code regarding the O Vz phenomenon.
Results: We find a differential distribution of objects in terms of effective temperature, with O Vz stars dominant at intermediate values. The O Vz stars in 30 Doradus tend to be younger (i.e., closer to the ZAMS) and less luminous, and they have weaker winds than the O V stars, but we also find examples with ages of 2-4 Myr and with luminosities and winds that are similar to those of normal O dwarfs. Moreover, the O Vz stars do not appear to have higher gravities than the O V stars. In addition to effective temperature and wind strength, our FASTWIND predictions indicate how important it is to take other stellar parameters (gravity and projected rotational velocity) into account for correctly interpreting the O Vz phenomenon.
Conclusions: In general, the O Vz stars appear to be on or very close to the ZAMS, but there are some examples where the Vz classification does not necessarily imply extreme youth. In particular, the presence of O Vz stars in our sample at more evolved phases than expected is likely a consequence of modest O-star winds owing to the low-metallicity environment of the LMC.

Based on observations at the European Southern Observatory Very Large Telescope in program 182.D-0222.Appendices are available in electronic form at http://www.aanda.org 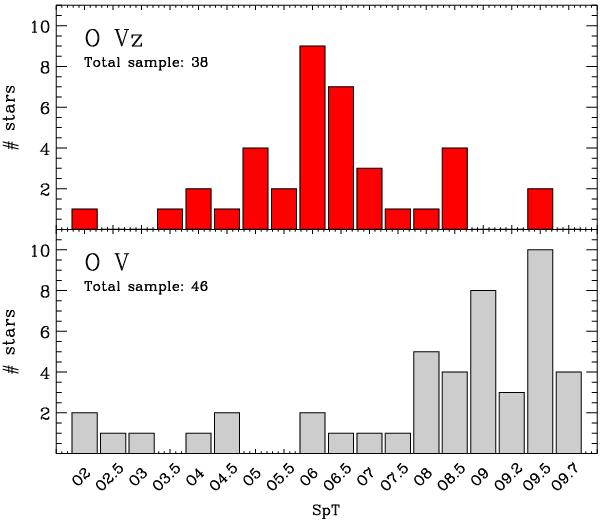