Seismic analysis of HD 43587Aa, a solar-like oscillator in a multiple system

Context. The object HD 43587Aa is a G0V star observed during the 145-day LRa03 run of the COnvection, ROtation and planetary Transits space mission (CoRoT), for which complementary High Accuracy Radial velocity Planet Searcher (HARPS) spectra with S/N > 300 were also obtained. Its visual magnitude is 5.71, and its effective temperature is close to 5950 K. It has a known companion in a highly eccentric orbit and is also coupled with two more distant companions.
Aims: We undertake a preliminary investigation of the internal structure of HD 43587Aa.
Methods: We carried out a seismic analysis of the star, using maximum likelihood estimators and Markov chain Monte Carlo methods.
Results: We established the first table of the eigenmode frequencies, widths, and heights for HD 43587Aa. The star appears to have a mass and a radius slightly larger than the Sun, and is slightly older (5.6 Gyr). Two scenarios are suggested for the geometry of the star: either its inclination angle is very low, or the rotation velocity of the star is very low.
Conclusions: A more detailed study of the rotation and of the magnetic and chromospheric activity for this star is needed, and will be the subject of a further study. New high resolution spectrometric observations should be performed for at least several months in duration. 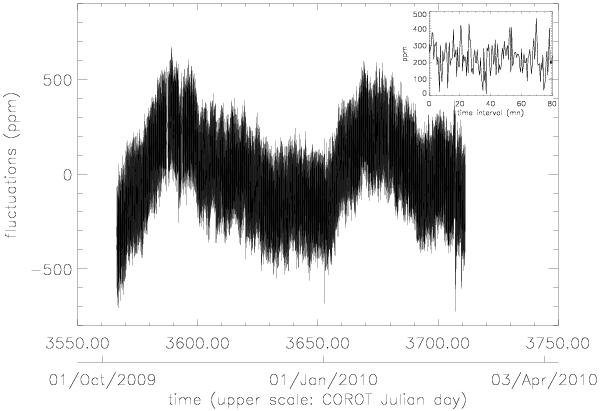