How dusty is α Centauri?. Excess or non-excess over the infrared photospheres of main-sequence stars

Context. Debris discs around main-sequence stars indicate the presence of larger rocky bodies. The components of the nearby, solar-type binary α Centauri have metallicities that are higher than solar, which is thought to promote giant planet formation.
Aims: We aim to determine the level of emission from debris around the stars in the α Cen system. This requires knowledge of their photospheres. Having already detected the temperature minimum, Tmin, of α Cen A at far-infrared wavelengths, we here attempt to do the same for the more active companion α Cen B. Using the α Cen stars as templates, we study the possible effects that Tmin may have on the detectability of unresolved dust discs around other stars.
Methods: We used Herschel-PACS, Herschel-SPIRE, and APEX-LABOCA photometry to determine the stellar spectral energy distributions in the far infrared and submillimetre. In addition, we used APEX-SHeFI observations for spectral line mapping to study the complex background around α Cen seen in the photometric images. Models of stellar atmospheres and of particulate discs, based on particle simulations and in conjunction with radiative transfer calculations, were used to estimate the amount of debris around these stars.
Results: For solar-type stars more distant than α Cen, a fractional dust luminosity fd ≡ Ldust/Lstar 2 × 10-7 could account for SEDs that do not exhibit the Tmin effect. This is comparable to estimates of fd for the Edgeworth-Kuiper belt of the solar system. In contrast to the far infrared, slight excesses at the 2.5σ level are observed at 24 μm for both α Cen A and B, which, if interpreted as due to zodiacal-type dust emission, would correspond to fd (1-3) × 10-5, i.e. some 102 times that of the local zodiacal cloud. Assuming simple power-law size distributions of the dust grains, dynamical disc modelling leads to rough mass estimates of the putative Zodi belts around the α Cen stars, viz. ≲4 × 10-6 M≤ftmoon of 4 to 1000 μm size grains, distributed according to n(a) ∝ a-3.5. Similarly, for filled-in Tmin emission, corresponding Edgeworth-Kuiper belts could account for {∼ 10-3 M≤ftmoon} of dust. Conclusions: Our far-infrared observations lead to estimates of upper limits to the amount of circumstellar dust around the stars α Cen A and B. Light scattered and/or thermally emitted by exo-Zodi discs will have profound implications for future spectroscopic missions designed to search for biomarkers in the atmospheres of Earth-like planets. The far-infrared spectral energy distribution of α Cen B is marginally consistent with the presence of a minimum temperature region in the upper atmosphere of the star. We also show that an α Cen A-like temperature minimum may result in an erroneous apprehension about the presence of dust around other, more distant stars.

Based on observations with Herschel which is an ESA space observatory with science instruments provided by European-led Principal Investigator consortia and with important participation from NASA.And also based on observations with APEX, which is a 12 m diameter submillimetre telescope at 5100 m altitude on Llano Chajnantor in Chile. The telescope is operated by Onsala Space Observatory, Max-Planck-Institut für Radioastronomie (MPIfR), and European Southern Observatory (ESO). 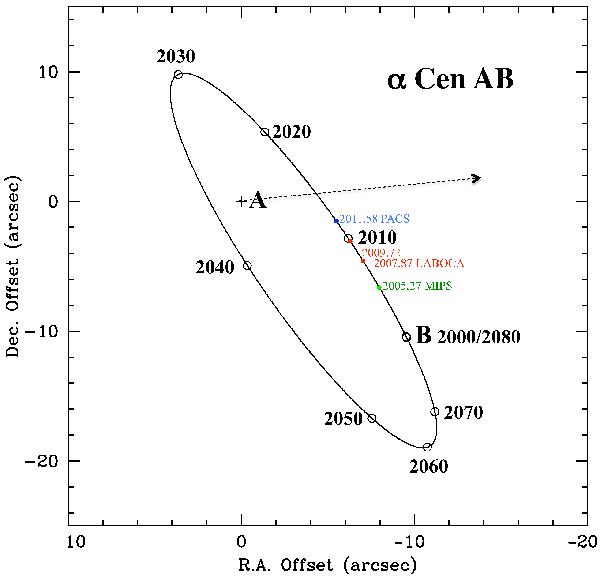