Spectroscopy of the short-hard GRB 130603B. The host galaxy and environment of a compact object merger

Context. Short duration gamma-ray bursts (SGRBs) are thought to be related to the violent merger of compact objects, such as neutron stars or black holes, which makes them promising sources of gravitational waves. The detection of a "kilonova"-likesignature associated to the Swift-detected GRB 130603B has suggested that this event is the result of a compact object merger.
Aims: Our knowledge on SGRB has been, until now, mostly based on the absence of supernova signatures and the analysis of the host galaxies to which they cannot always be securely associated. Further progress has been significantly hampered by the faintness and rapid fading of their optical counterparts (afterglows), which has so far precluded spectroscopy of such events. Afterglow spectroscopy is the key tool to firmly determine the distance at which the burst was produced, crucial to understand its physics, and study its local environment.
Methods: Here we present the first spectra of a prototypical SGRB afterglow in which both absorption and emission features are clearly detected. Together with multi-wavelength photometry we study the host and environment of GRB 130603B.
Results: From these spectra we determine the redshift of the burst to be z = 0.3565 ± 0.0002, measure rich dynamics both in absorption and emission, and a substantial line of sight extinction of AV = 0.86 ± 0.15 mag. The GRB was located at the edge of a disrupted arm of a moderately star forming galaxy with near-solar metallicity. Unlike for most long GRBs (LGRBs), NHX/AV is consistent with the Galactic ratio, indicating that the explosion site differs from those found in LGRBs.
Conclusions: The merger is not associated with the most star-forming region of the galaxy; however, it did occur in a dense region, implying a rapid merger or a low natal kick velocity for the compact object binary. 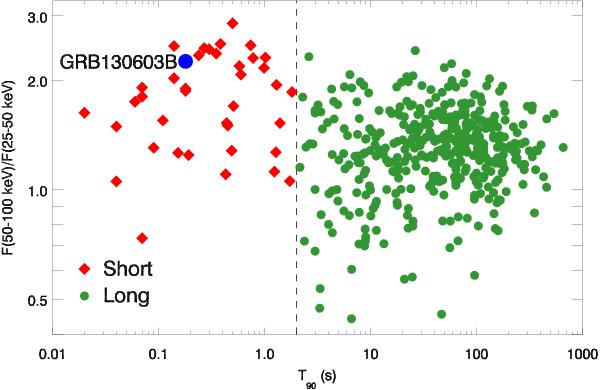