Aims: We intend to provide accurate data for the oscillator strengths, transition probabilities, lifetimes, and hyperfine shifts of the atomic energy levels in the fluorine (F)- like Ti, V, Cr, Mn, Co, Ni, Cu, Zn, and Mo ions for the diagnostic of the astrophysical plasma. Furthermore, we propose these ions for probing possible variation in the fine structure constant (αe) by observing their transition lines from the distant astronomical objects.
Methods: We have employed an all-order perturbative method in the relativistic coupled-cluster framework using the Dirac-Coulomb Hamiltonian for calculating the atomic wave functions in the considered F-like ions. We adopted the Fock-space formalism to account for the correlation effects among the occupied electrons by allowing all possible singly and doubly excited configurations in two steps: first considering the correlations between the electrons in a closed-shell configuration, and second constructing the open-shell configurations of the first three low-lying states in the considered atomic systems by removing the respective electron from the core orbitals. This procedure enormously simplifies the computational complexity and overcomes the need to select important configuration state functions in determining the atomic state functions in contrast to a truncated configuration interaction method. Moreover, corrections from the frequency-independent Breit interaction and the lowest order quantum electrodynamic effects are incorporated self-consistently.
Results: We present the calculated ionization potential energies of the electrons that are detached to form the above considered F-like ions. The correctness of our estimated results are ensured by comparing them with the available experimental values and other calculations. From these calculations, we evaluate the relativistic sensitivity coefficients that we propose here to be used for probing possible temporal variation of the fine structure constant (αe) through the precise astrophysical observation of the spectral lines of the transitions involving the above low-lying states. The accuracies of these sensitivity coefficients are appraised from the comparison of our calculated energies with the experimental values. We also present the line strengths by calculating the reduced matrix elements of the allowed transitions and of the M1 and E2 forbidden transitions. By combining our calculated line strengths with the observed wavelengths, we determine the oscillator strengths, transition probabilities, and lifetimes of the first two excited states of the above ions and compare them with the other theoretical calculations. The hyperfine splittings of the states are also presented by calculating their magnetic dipole and electric quadrupole hyperfine structure constants. 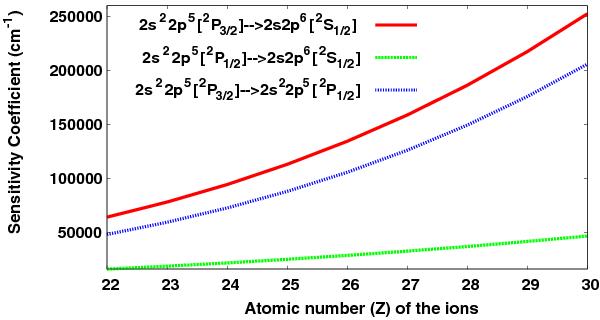