Context. Jets from rotation-powered pulsars so far have only been observed in systems moving subsonically through their ambient medium and/or embedded in their progenitor supernova remnant (SNR). Supersonic runaway pulsars are also expected to produce jets, but they have not been confirmed to so far.
Aims: We investigated the nature of the jet-like structure associated with the INTEGRAL source (the "Lighthouse nebula"). The source is a neutron star escaping its parent supersonically at a velocity exceeding 1000 km s-1.
Methods: We observed the Lighthouse nebula and its jet-like X-ray structure through dedicated high spatial resolution observations in X-rays (with Chandra) and in the radio band (with ATCA).
Results: Our results show that the feature is a true pulsar's jet. It extends highly collimated over ≳11pc, displays a clear precession-like modulation, and propagates nearly perpendicular to the system direction of motion, implying that the neutron star's spin axis in is almost perpendicular to the direction of the kick received during the supernova explosion.
Conclusions: Our findings suggest that jets are common to rotation-powered pulsars, and demonstrate that supernovae can impart high kick velocities to misaligned spinning neutron stars, possibly through distinct, exotic, core-collapse mechanisms. 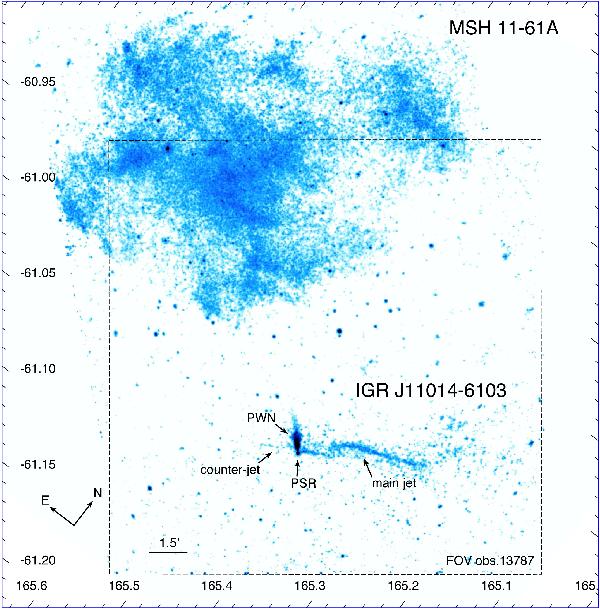